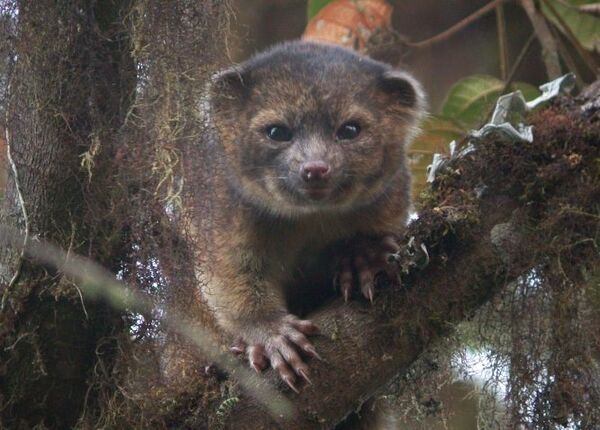 © Mark Gurney / The Smithsonian
Subscribe
US scientists announced Thursday the rare discovery of a new carnivorous mammal that lives in the trees of the Andes mountains in South America.

WASHINGTON, August 15 (By Karin Zeitvogel for RIA Novosti) – US scientists announced Thursday the rare discovery of a new carnivorous mammal that lives in the trees of the Andes mountains in South America.

Called the olinguito, the orange-brown, furry creature with a bushy tail and big, dark eyes is the first carnivore to be discovered in the Americas in 35 years, said Kristofer Helgen, curator of mammals at the Smithsonian’s National Museum of Natural History and leader of the team that discovered the new species.

“The discovery of the olinguito shows us that the world is not yet completely explored, its most basic secrets not yet revealed,” Helgen told reporters at a news conference Thursday in Washington.

“If new carnivores can still be found, what other surprises await us? So many of the world’s species are not yet known to science,” he said.

The newcomer to the animal kingdom, which looks like a cross between a cat and a teddy bear, is the latest scientifically documented member of the Procyonidae family, which also includes raccoons.

Olinguitos have been held in zoos in the United States in the past, but zookeepers thought the furry beasts were a subspecies of the larger olingo because they looked similar and came from the same part of the world.

It was with the advent of DNA testing that a team led by Helgen was able to prove that olinguitos were, in fact, a unique species. 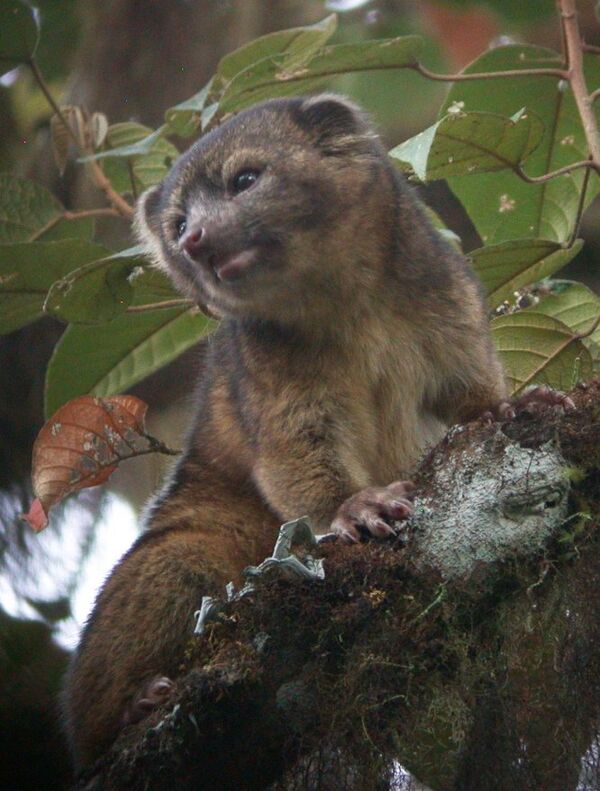 Experts say the olinguito looks like a cross between a cat and a teddy bear.
© Mark Gurney / The Smithsonian

Helgen’s team got their first clue that the olinguito might be a unique species when they set out a few years ago to conduct a comprehensive study of olingos.

As the researchers examined olingo specimens in museums, reviewed field data and conducted DNA testing, they noticed one specimen that had smaller teeth and skulls and a denser coat than its larger cousins.

Intrigued, Helgen organized a field expedition to the Andes to confirm what the research data indicated: that the researchers might have discovered a new species.

The expedition found olinguitos in a forest on the western slopes of the Andes, and documented the animal’s characteristics and details of its forest environment.

Their discoveries, which document that the olinguito is “mostly active at night, is mainly a fruit eater, rarely comes out of the trees and has one baby at a time,” were published Thursday in the zoology journal Zookeys.

On a less happy note, the researchers reported that the habitat for the 2-pound (1-kilogram), doe-eyed, furry creature is under intense pressure from human development, with nearly half of its cloud forest habitat already converted for agricultural use or turned into urban dwelling areas.

“The cloud forests of the Andes are a world unto themselves, filled with many species found nowhere else, many of them threatened or endangered,” Helgen said.

“We hope that the olinguito can serve as an ambassador species for the cloud forests of Ecuador and Colombia, to bring the world’s attention to these critical habitats.”