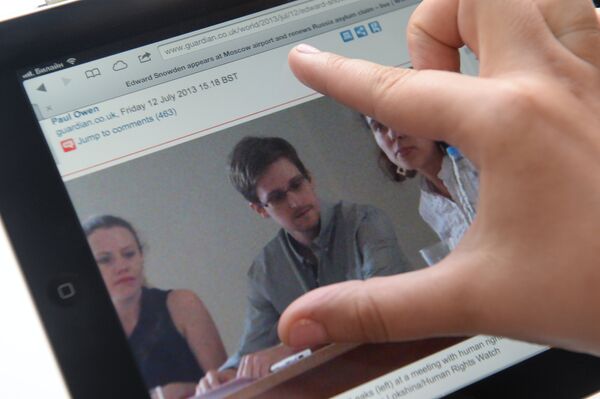 © RIA Novosti . Pavel Lisitsin
/
Go to the mediabank
Subscribe
International
India
Africa
Lon Snowden, the father of fugitive US intelligence leaker Edward Snowden, has gotten in touch with his son via the Internet because his fatherly feelings proved stronger than security considerations, his son’s attorney told RIA Novosti Thursday.

MOSCOW, August 15 (RIA Novosti) - Lon Snowden, the father of fugitive US intelligence leaker Edward Snowden, has gotten in touch with his son via the Internet because his fatherly feelings proved stronger than security considerations, his son’s attorney told RIA Novosti Thursday.

Edward Snowden is currently in a safe place, undertaking an adaptation course, and is OK, he said.

“Needless to say, he is missing his family,” Kucherena added.

His location has not been disclosed, though the Moscow migration authorities said last week he was not in the city.

Edward Snowden, 30, a former US intelligence contractor, is wanted by the United States on espionage and theft charges after leaking classified information about the US National Security Agency’s (NSA) sweeping telephone and electronic surveillance programs.

He received temporary asylum from Russia earlier this month, a move that has further strained US-Russian relations and prompted an outcry from the administration of US President Barack Obama and members of Congress.

Lon Snowden, who has received a visa from Russian authorities, plans to travel to Moscow to meet with his son soon after setting the date Wednesday with his attorney Bruce Fein.

Kucherena said the date of the visit will not be disclosed, primary for security reasons.

“That is also the will the family. I think that when his father comes here together with his lawyer… he will talk to reporters and reply to questions,” he said.

Washington has strongly condemned Russia’s decision to give Snowden temporary asylum, and has urged Moscow to send him back to the United States. Last week Obama called off a Moscow summit with Putin scheduled for September, citing lack of progress in bilateral ties as well as the Snowden case.