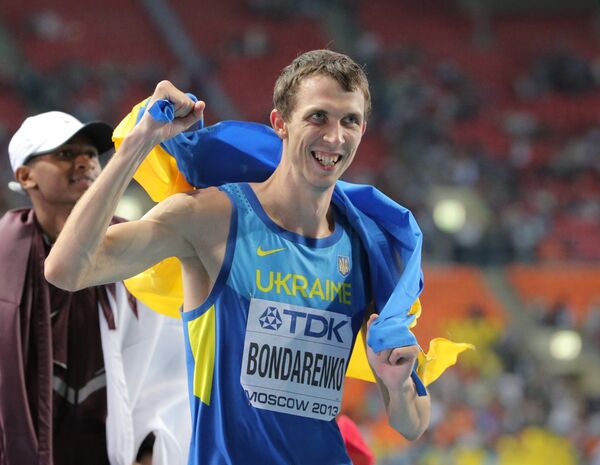 The mohawked Kemboi has won medals at the worlds dating back to 2003 in Paris. The 31-year-old began his gold-medal streak in Berlin four years ago. He also has two Olympic gold medals, one in 2004 and another in London last year.

"I'm so happy for this medal today," he said, insisting that it was anyone's race. "These championships, it's an open game. Everybody wants to win. I'm so happy to have won."

Kemboi's 8:06.01 time on Thursday was roughly five seconds slower than the championships record he set in 2009, but it was fast enough to elude his teenage countryman, Conseslus Kipruto, an up-and-comer in Kenyan steeplechase. France's Mahiedine Mekhissi-Benabbad, the London silver medalist, prevented Kenya from the podium sweep with a bronze-medal time of 8:07.86.

In the women's 400-meter hurdles, Zuzana Hejnova capped her best-ever season with gold in 52.83 seconds, the fastest this year and a massive 0.24 seconds off her previous personal best, which doubled as the Czech record. The silver went to Delilah Muhammad of the United States in 54.09, while her compatriot Lashinda Demus took the bronze half a second back.

In the men's version, Jehue Gordon of Trinidad and Tobago narrowly edged American Michael Tinsley to gold in a dramatic photo finish for his first senior medal.

Gordon won by one hundredth of a second, dipping at the line for a time 47.69 seconds as he and Tinsley shattered the best time in the world this year, previously 47.93.

The bronze went to Serbia’s Emir Bekric in a national-record 48.05.

In the field, Ukraine's Bohdan Bondarenko won high jump gold, setting a championship record of 2.41 meters and narrowly failing to clear Javier Sotomayor's world record of 2.45 by a centimeter.

Mutaz Essa Barshim of Qatar, one of the London 2012 bronze medalists, managed 2.38 for silver. The 22-year-old beat Canada's Derek Drouin, another third-placed jumper last year, into the bronze with the same result but fewer failures. That was a national record for Drouin.

Reigning Olympic champion Ivan Ukhov disappointed the home crowd after charging through the early heights but unexpectedly unable to overcome 2.38, though his last attempt was interrupted by a medal ceremony. His 2.35 was good for fourth.

The women's triple jump didn't deviate too far from the form book as London 2012 silver medalist Caterine Ibarguen won gold with a world-leading leap of 14.85 meters.

The Colombian, also world silver medalist from Daegu two years ago, equaled the mark with her second attempt to go one better at Luzhniki Stadium.

Defending world champion and world No. 1 Olga Saladuha was unable to improve upon a round-two jump of 14.65 and had to settle for bronze.