Tank Biathlon Kicks Off Outside Moscow 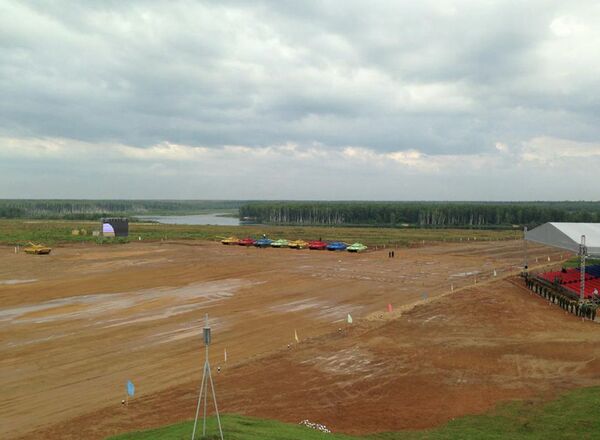 © RIA Novosti . Yekaterina Zgirovskaya
Subscribe
Russian army tank crews took their places on the starting blocks at a firing range outside Moscow Wednesday at the start of the world’s first ever tank biathlon.

ALABINO, Moscow Region, August 14 (RIA Novosti) – Russian army tank crews took their places on the starting blocks at a firing range outside Moscow Wednesday at the start of the world’s first ever tank biathlon.

The first day of the four-day competition saw the tankers, comprising the best crews from Russia’s four military districts, compete in a relay race across 18,300 meters (11.6 miles) of rough terrain, the Defense Ministry said.

The tanks have to cross various obstacles while firing their main guns and machine guns at targets at distances between 900 and 2,200 meters, incurring 500-meter-long penalty laps for misses.

Russia’s best tank crew will be selected over the next two days of the competition, and will then take on rival tankers from Armenia, Belarus and Kazakhstan in the finals on Saturday, the ministry said.

All the races will be held in T-72B tanks, one of the mainstays of the former Soviet Union’s army. The tanks are painted in unusual bright colors for the convenience of viewers, including red – Russia’s color for the finals – yellow, blue and salad green.

Next year, American, German and Italian teams are also expected to compete, according to Defense Minister Sergei Shoigu, who is personally credited with inventing the exotic motorsport.

The minister said military attaches from 46 countries were invited to watch the event this week, implying a possible increase in participants in 2014.

The event is being held to mark the 70th anniversary of the Battle of Prokhorovka this week, Shoigu’s deputy, General Arkady Bakhin, said Wednesday. Armored forces from the Red Army and the Wehrmacht clashed near the village of Prokhorovka in southern Russia during the Battle of Kursk in 1943, in what remains one of the biggest tank battles in history.