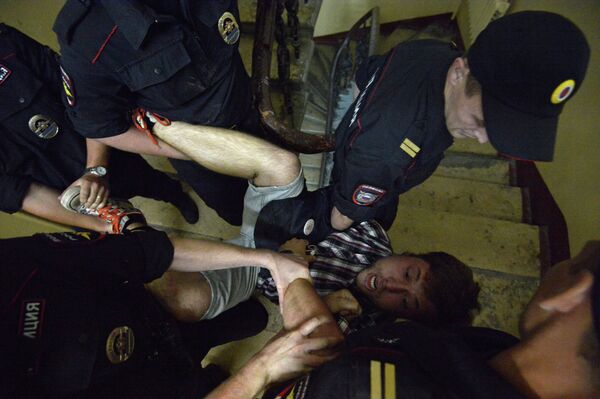 One of the four members of the grassroots group, “Navalny’s Brothers,” was taken into custody for 10 days, and three others got away with 1,000 ruble fines ($30) Wednesday on charges of disobeying a police order. The group recorded the raid and broadcast it live online.

The crackdown was launched overnight on a complaint by rival candidate Nikolai Levichev, who said he had received a tip that campaign leaflets were being produced illegally in a rented apartment near downtown Moscow’s Chistoprudny Boulevard.

Confusion reigned about whether the officers – who had no search warrant – had the right to be in the apartment. Police said during the raid that they thought the apartment was on fire, which in Russia is a valid pretext for trespassing without legal authorization, but an officer later claimed in court that the apartment’s owner had allowed them to enter.

Levichev, who heads A Just Russia, a leftist party with a track record of supporting the Kremlin, claimed that Navalny had funded the leaflets’ production without reporting it to the electoral authorities, which could have him banned from the mayoral race.

“This wasn’t a residence; it was a [campaign] office,” Levichev said Wednesday on Ekho Moskvy radio. A representative of Levichev was accused of beating up a reporter during the raid, but Levichev denied that.

Levichev, who made headlines recently with an allegedly anti-Semitic crossword puzzle in his campaign newspaper, said Wednesday that he received death threats after the raid and hackers attacked his party’s website.

Moscow electoral authorities said they were looking into the provenance of the two tons of leaflets seized in the raid.

Navalny, 37, a whistleblowing blogger who rose to become the face of the Russian opposition, denied that “Navalny’s Brothers” had gotten any money from him. He said the group had no formal links to his campaign.

He also claimed that the raid was meant to distract the public’s attention away from his latest exposé, in which he claimed that the daughter of his main rival, acting Mayor Sergei Sobyanin, was living beyond her means and could have been profiting from her father’s position.

Sobyanin can count on the support of 67 percent of Muscovites in the September 8 mayoral election, with the runner-up being Navalny, with 13 percent, the Russia Public Opinion Research Center, state-run pollster, said Wednesday. Levichev, whom Navalny has accused of being a Kremlin spoiler, scored 3 percent in the pre-election survey.