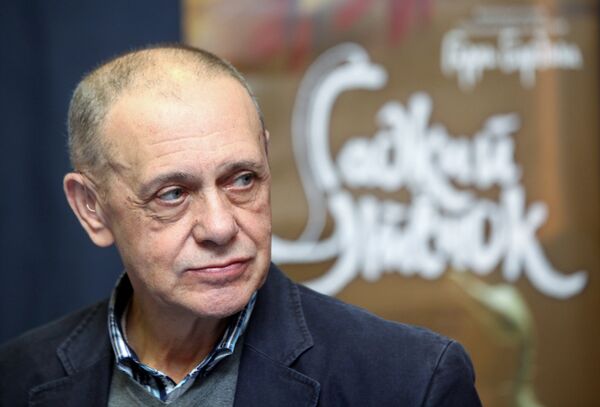 © RIA Novosti . Ilya Pitalev
/
Go to the photo bank
Subscribe
An award-winning animator said Wednesday that he faced a hefty fine from Russia’s Culture Ministry for missing a deadline on a three-part cartoon that the ministry had financed.

MOSCOW, August 14 (RIA Novosti) – An award-winning animator said Wednesday that he faced a hefty fine from Russia’s Culture Ministry for missing a deadline on a three-part cartoon that the ministry had financed.

Garry Bardin said the ministry wanted him to pay “about” 200,000 rubles ($6,000) after he missed a deadline on his “Three Melodies” cartoon because he and one of his animators were sick.

“I was very offended,” he told RIA Novosti.

Bardin, 71, said the ministry had allocated 11 million rubles ($330,000) for the three-part film, based on a Louis Armstrong song and melodies by French turn-of-the-century composers Camille Saint-Saens and Jules Massenet. He also used crowd-sourcing to collect an additional 2.2 million rubles ($70,000) for the project.

The Culture Ministry said that, in July, Bardin did ask to prolong the deadline on “Three Melodies” by five months and submitted medical certificates confirming that he was sick for 3 1/2 months, Vladimir Telnov of the ministry’s cinematography department said in a statement.

But since the ministry imposes fines on filmmakers if they miss deadlines on works it has financed, Bardin will have to pay the fine, although his sick leave will be deduced from the sum, said the statement, posted on the ministry’s website.

Bardin’s first animated motion picture was released in 1975. He is known for using such unorthodox materials as Plasticine clay, matches or wire in his cartoons.

The animator won the 1988 Cannes Film Festival’s top prize, the Palme d'Or, for “Vykrutasy” (Frills), a 10-minute cartoon whose characters are made of steel wire.

This is not the first time an acclaimed Russian animator misses a deadline or two.

Yury Norstein, who has come up with a sophisticated and time-consuming technique of seemingly three-dimensional yet hand-painted cartoons, has been painstakingly working on “The Overcoat,” an animated short based on Nikolai Gogol’s short story, since 1981.