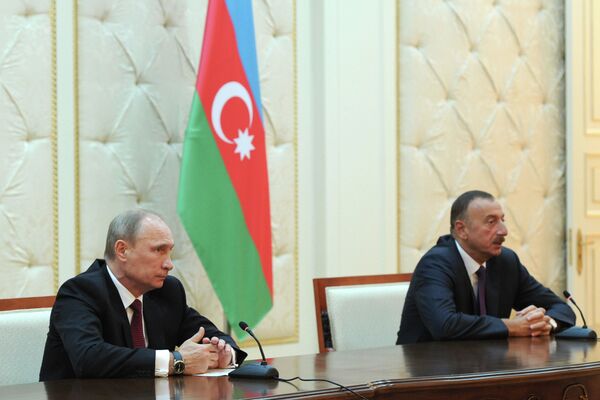 © RIA Novosti . Michail Klimenteev
/
Go to the photo bank
Subscribe
The Russian and Azerbaijani state oil companies on Tuesday agreed to establish a joint venture on a parity basis to prospect and produce oil and gas in Russia and Azerbaijan and in other countries as Russian President Vladimir Putin paid a one-day working visit to Baku.

MOSCOW, August 13 (RIA Novosti) – The Russian and Azerbaijani state oil companies on Tuesday agreed to establish a joint venture on a parity basis to prospect and produce oil and gas in Russia and Azerbaijan and in other countries as Russian President Vladimir Putin paid a one-day working visit to Baku.

During Putin’s visit – designed to discuss a wide range of bilateral issues, including trade, energy, transportation and the Nagorno-Karabakh conflict – Rosneft reported that it had also agreed with the State Oil Company of Azerbaijan Republic (SOCAR) to jointly use some pipelines and terminals to optimize supplies to consumers.

A cooperation agreement was signed by Rosneft and SOCAR respective chiefs, Igor Sechin and Rovnag Abdullayev, in the presence of Putin and Azerbaijani leader Ilham Aliyev. The two oil giants also said they would cooperate in marketing and sales of oil, gas and oil products.

LUKoil CEO Vagit Alekperov is accompanying Putin on his visit to Azerbaijan, just as Rosneft chief Sechin is.

Bilateral interaction is set to be expanded in the military and technical sphere, and border activities and between the two countries’ emergencies ministries. Experts polled by RIA Novosti have said Moscow has yet failed to make Baku its ally rather than partner.

Azerbaijani President Aliyev told reporters after a meeting with Putin that Moscow and Baku planned to continue military and technical collaboration.

According to Aliyev, his country’s defense industry cooperation with Russia is worth $4 billion and keeps growing. Azerbaijan is among the top buyers of Russian arms and other military equipment, which, Aliyev said, is considered the best in the world.

The two countries’ emergencies ministries signed a cooperation plan for 2013-2015, and a new program to train Azerbaijani emergencies staff will soon be worked out, a Russian ministry spokeswoman said.

Putin and Aliyev also touched upon the issue of Nagorno-Karabakh.

Relations between Azerbaijan and Armenia have been strained for over two decades, since the conflict over Nagorno-Karabakh, a predominantly ethnic Armenian region, first erupted in 1988. The region then claimed independence from Azerbaijan to join Armenia.

“During the talks we touched upon urgent international issues, including, of course, the Nagorno-Karabakh issue,” Putin said. “Russia has been actively contributing to the soonest settlement of the conflict, which is only possible through political means.”

Aliyev said the conflict may only be solved on the basis of international law.

More than 30,000 people are estimated to have died on both sides between 1988 and 1994, when a ceasefire was agreed. Nagorno-Karabakh has remained in Armenian control, and tensions between Azerbaijan and Armenia have persisted.

The conflict over Nagorno-Karabakh is mediated by the OSCE Minsk Group, which comprises the United States, Russia and France.