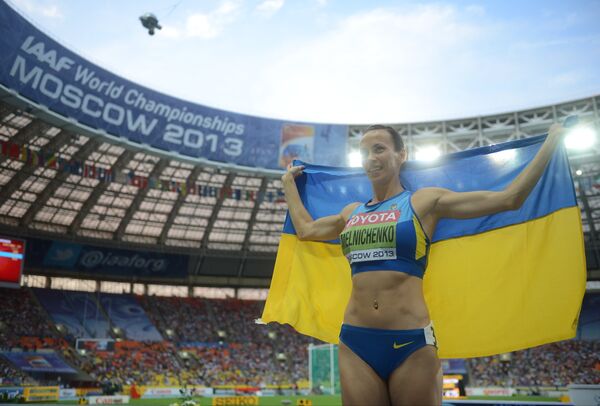 Day four of the world athletics championships in Moscow belonged to Russian pole vault star Yelena Isinbayeva, who won her first major title for five years in a fairy-tale evening at Luzhniki Stadium on Tuesday.

Isinbayeva, 31, smashed her season's best by 11 centimeters with a winning jump of 4.89 meters that elicited a deafening roar from an unusually packed arena in the Russian capital, leaving Olympic champion Jennifer Suhr with the silver after the American's best effort of 4.82.

Cuba's Yarisley Silva, who finished runner-up to Suhr in London last year, had to settle for the bronze on countback after clearing the same height but only on the third attempt.

Isinbayeva soaked up the adoration of 50,000 screaming fans on a colorful lap of honor that ended with a hug for Sports Minister Vitaly Mutko.

"It's been a long journey from Beijing to Moscow," Isinbayeva said, referring to her last major outdoor triumph at the 2008 Olympics. "I couldn't have done it without the support of the fans and the support of my genius coach," she gushed.

Elsewhere in the field, Robert Harting underlined his status as the best discus thrower in modern times, following up his London Olympic triumph with a third-successive world title.

The 28-year-old took the gold with his fourth attempt of 69.11 meters as Polish star Piotr Malachowski, the Beijing silver medalist and the only man to have thrown over 70 meters this year, could only manage 68.36 for second place again.

Harting celebrated in his trademark style, ripping his vest off in front of the crowd, and said he had been forced to overcome back pain and tight muscles during the final.

"You have to deal with the situation as best as possible, with skill," he said.

On the track, LaShawn Merritt stormed to the 400-meter gold in a world-leading 43.74 seconds, leaving his rival Kirani James in the dust nearly a second behind as he regained his title.

"I was hungry. Probably the hungriest person in the field. No, I was starving," Merritt said. "Life is full of ups and downs ... I never stopped training I never stopped being confident."

Silver went to Tony McQuay of the United States, who ran a personal-best 44.40, with bronze for Luguelin Santos of the Dominican Republic in a season's best: 44.52.

Aman, 19, produced a huge surge on the final straight as he won in a time of 1 minute 43.31 seconds to add the triumph to his one other senior title to date, gold at last year's world indoor championships.

“I'm very happy and satisfied, because this is gold, I'm the world champion,” he said. “There was a strong race, but I had speed and I need to be patient."

In a final that lacked any of the 2011 world or 2012 Olympic medalists, the silver went to Nick Symmonds of the United States in a season's best of 1:43.55, while the bronze went to Djibouti’s Ayanleh Souleiman in 1:43.76.

Symmonds dedicated his silver medal to his gay and lesbian friends back home, becoming the first athlete to openly criticize Russia's controversial anti-gay law on the country's soil.

"As much as I can speak out about it, I believe that all humans deserve equality as however God made them," he told R-Sport. "Whether you're gay, straight, black, white, we all deserve the same rights."

Meanwhile, there was golden joy for Ukrainian heptathlete Ganna Melnichenko, who edged Canada's Brianne Theisen-Eaton by 56 points in a harried competition that went to the wire in the 800 meters, the sport's seventh and final discipline.

Theisen-Eaton had been hoping to leave Moscow with a gold to equal the one claimed by her newlywed husband Ashton Eaton of the United States in the decathlon. Instead, the athletics power couple will settle for silver on the one-month anniversary of their wedding.

The day had begun as it ended with glory for Russia, as London Olympic champion Elena Lashmanova added a world athletics title in the women's 20-kilometer race walk.

The result left Russians undefeated in the event at every world championships dating back to 2001.

"This victory is of no less importance than the Olympics one for me," Lashmanova, who won in 1:27:08 hours, said. "And it was not only my hard work that paid off, also the work of my coaches."

Russian Anisya Kirdyapkina finished three seconds behind her compatriot for silver, with China's Liu Hong claiming the bronze in 1:28.10.

Wednesday is restricted to morning competition only, with the men's 50-kilometer race walk the single medal event of the day. Qualifying events are on in the women's hammer, the women's 5,000 meters, the men's long jump, and the men's 1,500 meters.