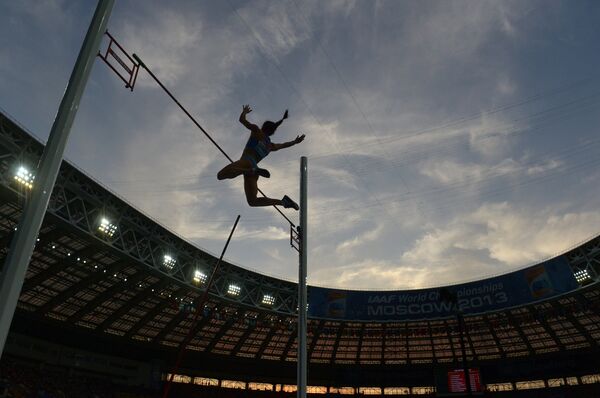 Isinbayeva, 31, smashed her season's best by 11 centimeters with a winning jump of 4.89 meters that elicited a defeaning roar from a packed Luzhniki arena, leaving Olympic champion Jennifer Suhr with the silver after the American's best effort of 4.82.

"Rossiya! Rossiya!" she screamed on her celebratory lap around the circuit that was punctuated with cartwheels.

Cuba's Yarisley Silva, who finished runner-up to Suhr in London last year, had to settle for the bronze on countback after clearing the same height but only on the third attempt.

The last major outdoor title won by Isinbayeva, the setter of 28 world records, was her second Olympic gold at the 2008 Beijing Games. It is her third world title after gold medals in Helsinki in 2005 and Osaka in 2007.

Silva's third failure at 4.89 prompted an ecstatic Isinbayeva to thrust her arms skyward and make a beeline for her coach in the stands as the 50,000-strong crowd went wild, the first time the arena had truly exploded all week – including Sunday's 100-meter final, won by Usain Bolt.

She hugged her coach Evgeny Trofimov, who introduced her to pole vaulting when she was rejected as a gymnast at 15 years of age.

As a token present to the crowd, Isinbayeva stripped off her tracksuit one more time to attempt a 29th record at 5.07, one centimeter over the mark she set in Zurich in 2009, but never came close.

Isinbayeva tested the nerves of the thousands who had turned out to see her right from the off, crashing clumsily into the bar at her opening height of 4.65 before, as if it were all part of the plan, clearing it by a big margin. The next height of 4.75 appeared just as easy, cleared on the first attempt.

Then, after a nervy failure, Isinbayeva sent the home crowd into raptures with a clearance at 4.82. It was the first time the home crowd sensed a home victory was a serious possibility. Suhr regained the lead by leaping the same height, landing on the crash mat and praying to the bar to cease its vibrations. Silva followed.

But the tenacious Russian wasn't to be outdone, and soared over 4.89 at the first attempt. That visibly shook Suhr, who couldn't follow the Russian a second time and, demoralised, never looked close to conquering the height. Silva also cracked under pressure and the fairy tale was complete.

Fabiana Murer of Brazil, the defending champion, shocked the onlookers with three failures at 4.75, though the form guide shows she hasn't been above 4.73 this year and so it wasn't a massive surprise that she mirrored her disappointing exit from the London Olympic competition last year.