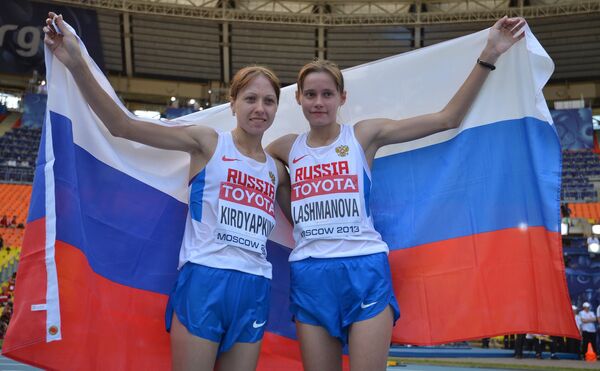 Russians have now won 20-kilometer race walk gold at every world championships dating back to 2001. Lashmanova, who won in an official time of 1:27:08 hours, supplants three-time defending champion Olga Kaniskina, who pulled out of Moscow last week with an injury.

"This victory is of no less importance than the Olympics one for me," Lashmanova said. "And it was not only my hard work that paid off, also the work of my coaches."

Kirdyapkina, who won bronze at the Daegu worlds two years ago, took silver at 1:27.11 on a course that meandered along the Moscow River outside Luzhniki before finishing back on the track.

"Well, I'm also a little upset as I couldn't finish first, but the silver medal is also good," she said. "I have a bronze medal, now a silver one, so next should be a gold."

"I'm very happy to have won a medal today," she said. "This was what I was aiming for. I knew that the Russians were very strong. Our team strategy was to follow them."

Kaniskina's absence ruined the chance for the elusive Russian podium sweep in the women's 20-kilometer race walk, as did Vera Sokolova's early disqualification. Sokolova holds the fourth-fastest mark of all-time at 1:25.08.

The medals are Russia's fourth and fifth of the nine-day championships. They now have two gold medals. Hong's medal represents China's third of the competition.