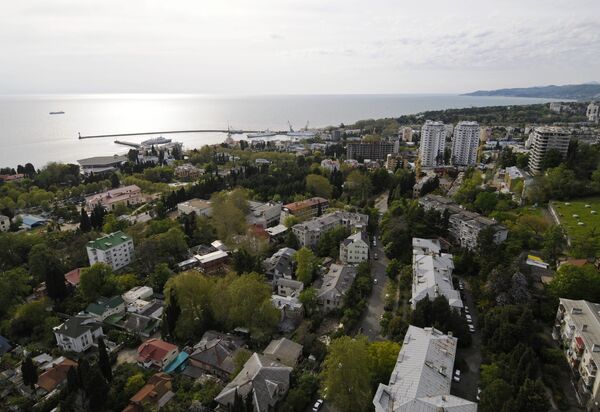 © RIA Novosti . Mikhail Mordasov
/
Go to the photo bank
Subscribe
A Russian man who was told by doctors that swimming would help his back has reportedly swum 400 kilometers (250 miles) across the Black Sea, resting at night in an inflatable boat.

MAIKOP, Krasnodar Region, August 12 (RIA Novosti) – A Russian man who was told by doctors that swimming would help his back has reportedly swum 400 kilometers (250 miles) across the Black Sea, resting at night in an inflatable boat.

Yury Burlak, a member of the Russian Geographical Society, reached the Russian coastal city of Sochi on Sunday, after having left 17 days earlier from the Turkish city of Ordu, a spokesman for the society told RIA Novosti on Monday.

Burlak rested at night in the inflatable boat and was towing it in during the day, tied to his back, along with a 500-kilogram (1,100-pound) load including food, a tent, navigational equipment and his friend and medical adviser Yevgeny Suprun.

Though the distance from Sochi to Ordu is about 400 kilometers, Burlak and his boat actually traversed some 500 kilometers thanks to several tornados and storms they had to weather, Russian state newspaper Rossiiskaya Gazeta reported.

They were towed by border guards as they neared Sochi because the current was pulling them away, but they otherwise received no help, the report said.

The two men each lost 10 kilograms during the trip, which was to promote the upcoming Sochi Olympics, Rossiiskaya Gazeta said.

Burlak sustained a spinal cord injury several years ago and was barely able to walk, but has recovered thanks to his passion for swimming, which already saw him take two swimming trips 100 and 200 kilometers long in 2011 and 2012, respectively, reports said.

He is not about to stop and considers traveling along the Volga, Europe’s longest river at 3,690 kilometers, Russian media reported.