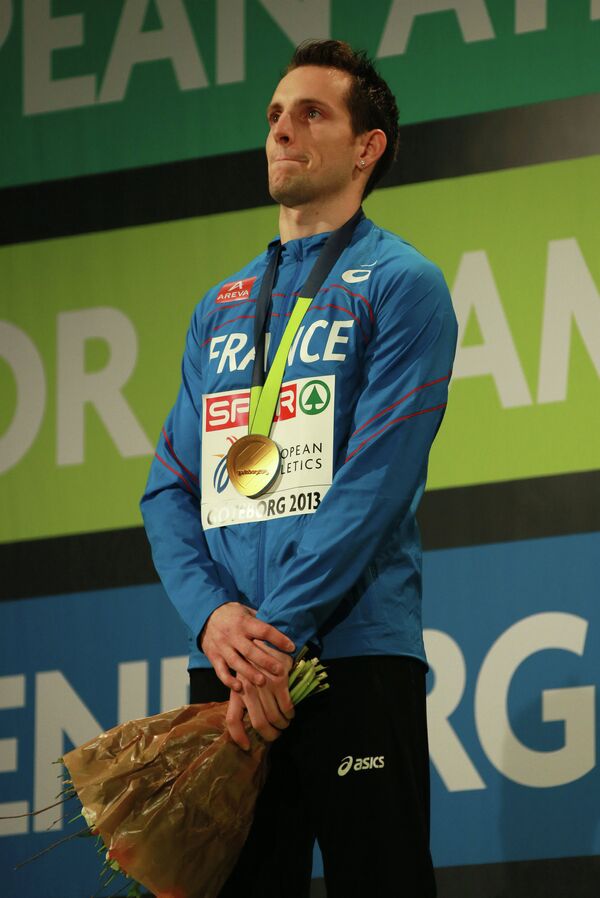 MOSCOW, August 12 (R-Sport) - Another devastating example of Jamaican power sprinting capped day three at the world athletics championship on Monday as Shelly-Ann Fraser-Pryce destroyed the women's 100 meters for gold, following in the footsteps of an electric Usain Bolt 24 hours earlier.

The reigning Olympic champion Fraser-Pryce found a gear that her rivals simply didn't have to clock in at a world-leading 10.71, allowing her fans at Moscow's Luzhniki Stadium to thrust their fists in the air before surprise silver medalist Murielle Ahoure had even crossed the line.

"There was lots of hard work and commitment," Fraser-Pryce said. "This is what I worked for. I was focused on getting this done."

The sparse but enthusiastic Moscow crowd had barely recovered from one of the most exciting 400-meter finals in memory as veteran British runner Christine Ohuruogu reeled in Botswana's defending champion Amantle Montsho to claim gold by four thousandths of a second in a photo finish.

"This is like a dream, it’s too much. I can’t even put it into words," Ohuruogu said. "When I finished I didn’t know if I’d won it. I didn’t want to get overexcited until my name came up. I heard everyone screaming and I looked up and I’m just so happy."

There was surprise joy for another veteran earlier as 31-year-old American David Oliver recorded a season's best time of 13.00 to win the 110m hurdles.

"I was tired of being injured, tired of failing, tired of running like a donkey," Oliver said. "It's just not good when you're not winning."

In the field there was simply no match for New Zealand shot putter Valerie Adams, the 28-year-old London Olympic champion, whose four legal throws were all good enough for gold.

"The most amazing thing tonight was to be able to do that for New Zealand, to create history," an emotional Adams said after her victory. "To have this gold medal around my neck - I've got four of these babies now - it's quite amazing."

A distance of 20.88 meters took it, with Germany's Christina Schwanitz, the reigning European indoor champion, snatching silver on her last attempt with a personal best of 20.41. Gong Lijiao, the London 2012 bronze medalist, claimed bronze by a single centimeter with a throw of 19.95.

The men's pole vault was infinitely more competitive, however, as Raphael Holzdeppe of Germany claimed the gold after winning a dramatic jump-off with London Olympic champion Renaud Lavillenie.

Both finalists had cleared 5.89 meters, and both missed the next height of 5.96, handing the gold to the 23-year-old Holzdeppe, the Olympic bronze medalist, on countback. German veteran Bjorn Otto, the London 2012 silver medalist, failed at 5.89 and took the bronze after recording 5.82, the same result as American former world champion Brad Walker and another German, Malte Mohr, but with fewer failures.

Simultaneously, Poland was in the process of claiming its first medal of the championships as Polish rookie Pawel Fajdek hurled a season-leading 81.97 meters out of nowhere to claim a shock gold in the men's hammer.

The bespectacled 24-year-old is a two-time student games champion but has never made a mark on the global stage before, booming onto the scene with a big personal best at an overcast and muggy Luzhniki Stadium.

“That was my dream after London, when I sucked," he said. "All year I think just only about Moscow ... and that was success because I’m a champion now.”

His second-best attempt of 80.92 would also have clinched gold as Hungary's Olympic champion Krisztian Pars, the only other man to breach the 80m mark, could only go 30 centimeters beyond it.

Czech thrower Lukas Melich ensured a Central European podium sweep with 79.36 in the third round, the medal easily the 32-year-old's best-ever achievement.