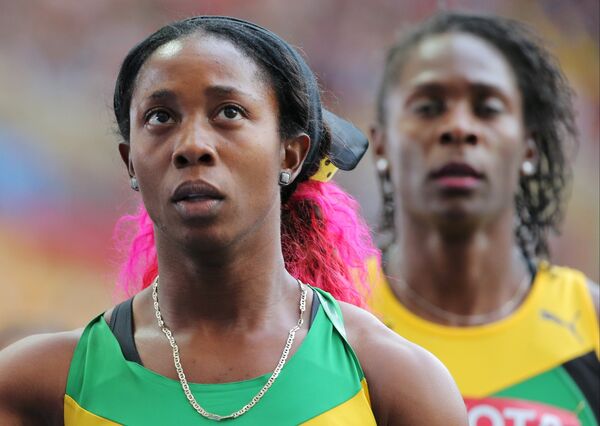 © RIA Novosti . Vitali Belousov
/
Go to the photo bank
Subscribe
Shelly-Ann Fraser-Pryce of Jamaica won gold in the women's 100 meters at the world athletics championships in Moscow on Monday, setting the best time of the season while reclaiming the title from the United States.

MOSCOW, August 12 (R-Sport) - Shelly-Ann Fraser-Pryce of Jamaica won gold in the women's 100 meters at the world athletics championships in Moscow on Monday, setting the best time of the season while reclaiming the title from the United States.

Fraser-Pryce, the reigning Olympic champion, earned her victory in convincing, dominating fashion, breaking free of surprise silver medalist Murielle Ahoure of the Ivory Coast with roughly 20 meters remaining for a 10.71 finish. Her gold is Jamaica's second in the 100 meters at the Moscow worlds after Usain Bolt won on Sunday.

"There was lots of hard work and commitment," she said. "This is what I worked for. I was focused on getting this done."

Ahoure, 25, took silver in 10.93 for the Ivory Coast's first medal at a world championships since the tiny African nation began competing in 1980. She is only the second non-Jamaican or non-American to finish on a women's 100-meter world championships podium since 2005.

"I'm really excited to be here as just an African woman first of all. I'm just ecstatic and it was a really good race," Ahoure said.

American Carmelita Jeter, the 2011 world champion, claimed bronze on Monday with a 10.94. After straining her right quadriceps in May, forcing her to miss the US championships the following month, it was unclear if the 33-year-old would be ready for Moscow.

"I was just happy that I was even able to compete in this race," she said. "I had to get a medal. I wasn't going to leave without a medal. This medal means a lot because if you know how hard it was me to get here, you'd know it was a battle."

Fraser-Pryce, whose win comes in the wake of countrywoman and 2011 worlds silver medalist Veronica Campbell-Brown's doping suspension, was .01 off Marion Jones's worlds record of 10.70 set in 1999.

U.S. sprinter English Gardner, who ran a 10.94 in her preliminary-round qualifying heat, cracked 11 seconds in the final at 10.97 and wound up in fourth.