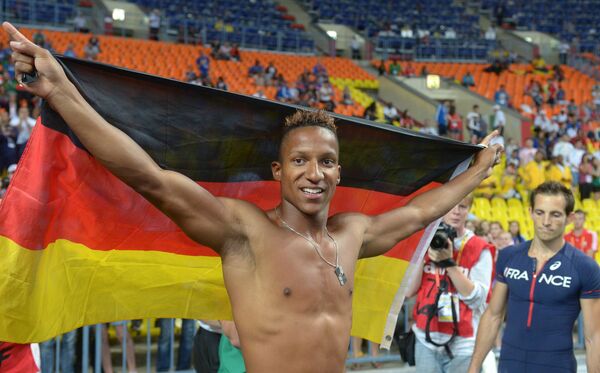 © RIA Novosti . Grigori Sysoev
/
Go to the photo bank
Subscribe
It seemed to take an age. As pole vault’s rock star Renaud Lavillenie readied for his final attempt, a make or break leap for the gold medal, time dragged on and Raphael Holzdeppe waited.

MOSCOW, August 12 (R-Sport) - It seemed to take an age. As pole vault’s rock star Renaud Lavillenie readied for his final attempt, a make or break leap for the gold medal, time dragged on and Raphael Holzdeppe waited.

Officials tweaked the position of the bar with long sticks and the crowd waited with bated breath. Finally, Lavillenie sprinted, vaulted – and crashed onto the bar. That was the cue for Holzdeppe, confirmed as the gold medalist, to rip off his Germany vest and charge toward the stands in celebration.

“I was really nervous. I couldn’t sit down," he said. "I was just waiting for Renaud to do his last jump. I knew he could jump 96 because he’s done it so many times this year, and when he missed the third time I just had to run and see my coach and everybody.”

Both finalists had cleared 5.89 meters, and both missed the next height of 5.96, handing the gold to the 23-year-old Holzdeppe, the Olympic bronze medalist, on countback.

Pole vault legend Sergei Bubka had predicted six-meter plus vaults, a break into the rarefied realm where he set his string of still-unmatched world records. In that regard, the competition failed – the winning vault 5.89 meters – but it produced a captivating spectacle. Holzdeppe was immaculate in his first three heights, making easy work out of 5.65, 5.82 and, impressively, 5.89.

By contrast, Lavillenie came into the championships as the Olympic champion and the event's undisputed star, a man some tipped to win and then challenge heights only the great Bubka had ever cleared.

The Frenchman wobbled throughout, however, missing his first attempt at his opening height of 5.65. He did the same at 5.82 before clearing it despite brushing the bar.

He stayed in the competition by the skin of his teeth, barely overcoming 5.89 at the third attempt. His mystique vanished and after the competition, Lavillenie did too, failing to appear at the scheduled media conference for the top three.

German veteran Bjorn Otto, the London 2012 silver medalist, failed at 5.89 and took the bronze on countback after recording 5.82, the same result as American former world champion Brad Walker and another German, Malte Mohr.

A surprise absentee from the final was Cuban Lazaro Borges, the 2011 world silver medalist, who failed to clear 5.55 in qualifying.