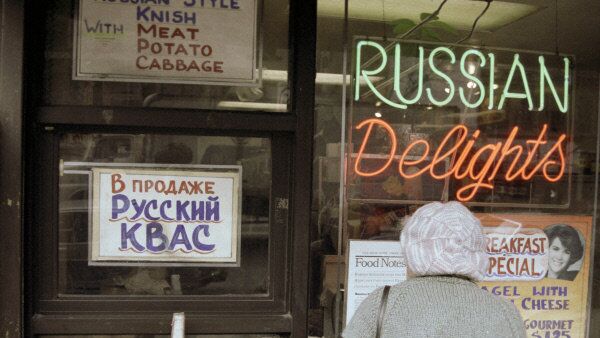 © RIA Novosti . G. Kazarynov
Subscribe
Americans have developed quite an appetite for many of Russia’s well known and not so well known food and drink items – drinking enough vodka to make it the most popular alcoholic spirit in the United States; eating Beef Stroganoff; and dipping into Beluga caviar from the Caspian Sea, if they can afford it. But are Americans ready for kvas?

WASHINGTON, August 12 (By Karin Zeitvogel for RIA Novosti) – Americans have developed quite an appetite for many of Russia’s well known and not so well known food and drink items – drinking enough vodka to make it the most popular alcoholic spirit in the United States; eating Beef Stroganoff; licking popsicles made from pickle juice, a popular hangover cure in Russia; and dipping into Beluga caviar from the Caspian Sea, if they can afford it.

But are Americans ready for kvas, the ever-so-slightly alcoholic drink made from fermented grain that Russians down on a hot summer’s day the way Americans quaff sweet iced tea or a can of Coke? One US brewery and several specialty food makers think so.

Beaver Brewing owner Dan Woodske has written a book about the beverage, which according to a report on National Public Radio (NPR) has been consumed in Russia and eastern Europe since the 10th century.

In New York, kvas lovers can drink a version of the age-old Russian beverage made by The Gefilteria, a company that adapts old world Jewish foods to the tastes of younger consumers.

The Gefilteria’s kvas is made with beet juice and fermented with ginger, giving it a vivid purple head of foam when the bottle is opened and a piquant, sweet fizz when it’s drunk.

Jeffrey Yoskowitz, The Gefilteria’s co-founder and chief pickler, described the beet kvas as having “a somewhat sour flavor, but being a little more sweet than other kvas on the market because we ferment with ginger and, I believe, longer than other people – for seven to 10 days.”

“Our kvas is an effervescent drink, with a little natural carbonation throughout. It’s very smooth and there’s an earthiness and light fruitiness about it,” he told RIA Novosti, adding that he fully expects kvas to be “the next big thing” on the American beverage market.

The ages-old Russian drink, kvas, which is sometimes spelled kvass, is catching on in America. (Courtesy: The Gefilteria)

In Indiana, Andy McDowell of Hidden Pond Farm has seen kvas sales jump in the four years since he and his wife began bottling and selling the beverage.

The mom and pop producers of fermented foods went from selling “one or two bottles at a farmer’s market, to many, many stores stocking it now throughout Indiana and customers ordering it online,” McDowell said.

McDowell attributed the drink’s popularity to a renewed awareness of the benefits of eating – or drinking – fermented foods, which are said to aid digestion, allowing nutrients in foods to be more easily absorbed. That, in turn, boosts the immune system.

Russians have known that for centuries, McDowell said, and in the United States, more and more people are becoming aware of the benefits of fermented foods, thanks to books, newspaper articles and television doctors extolling the virtues of fermentation.

But he disagreed that kvas will be “the next big thing” in the United States.

“It’s not available at your local convenience store or supermarket, and our target customer buys our kvas for the health benefits, not the flavor,” he said.

But unlike other, better known fermented drinks that sell for less per fluid ounce in the United States – like red wine or beer – kvas has the added benefits of being packed with nutrients, and helping to neutralize the effects of alcohol like gin or vodka, Yoskowitz said, and added that both spirits go extremely well with kvas.

Kvas - sometimes spelled with a double 'S' in the United States - is said to mix well with gin or vodka, making it an exotic ingredient for martinis. (Courtesy: The Gefilteria)

“In Ukraine, people drink beet kvas as a chaser after vodka because beet cleanses the liver, so the Ukrainians say a glass of kvas helps to neutralize the effects of alcohol on the liver,” he told RIA Novosti.

Yoskowitz insisted that kvas will catch on for more reasons than its purported detoxifying effects, citing its newness and exotic nature, which he said appeals to young Americans, while the strong history and culture behind kvas bring back memories for older people who grew up drinking the fermented beverage from the corner vendor in Russia or Eastern Europe, who sold it from a barrel.

But the main reason the drink that’s so well loved in Russia and Eastern Europe is likely to see its popularity bubble up in the United States is because “it’s delicious,” Yoskowitz said.