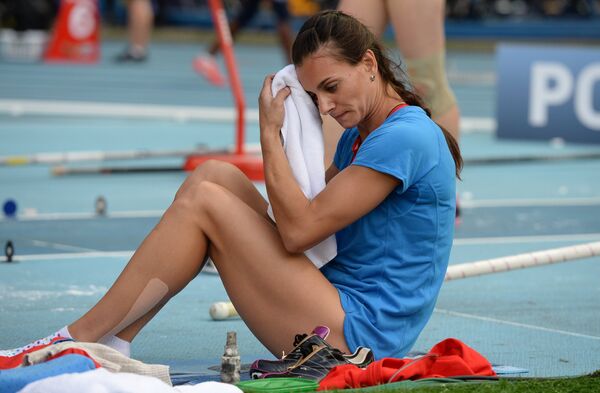 Russian pole vault star Yelena Isinbayeva backtracked Sunday on a vow that the ongoing 2013 World Athletics Championships in Moscow would be her last competition before retiring.

MOSCOW, August 11 (R-Sport) - Russian pole vault queen Yelena Isinbayeva backtracked Sunday on a vow that the ongoing 2013 World Athletics Championships in Moscow would be her last competition before retiring.

Isinbayeva, 31, has said repeatedly that she intends leave sport, get married and start a family after the Moscow championships, but she told reporters after qualifying comfortably for Tuesday's pole vaulting final that her glittering career was not over.

"I'm not ending my career... I'll start a family, I'll give birth and I'll try and return and reclaim all my gold medals," said the two time world and Olympic champion. "If it doesn't work out, then I'll announce my retirement. Right now I'm not leaving. I'm taking another break because I want to have children. I'll definitely miss the next season, and after that we'll see."

As recently as last month, Isinbayeva appeared unequivocal on her desire to retire, after setting 28 world indoor and outdoor world records in over a decade of pole vaulting.

“My career will finish 100 percent at the world championships,” Isinbayeva said. “For me it will be a nostalgic moment, I should get pleasure from the performance and I will try to show the best I can.”

Isinbayeva won the bronze at the London Olympics last year with a disappointing jump of 4.70 meters, 36 centimeters short of her personal best, in a competition won by US athlete Jenn Suhr who cleared a height of 4.75 meters.