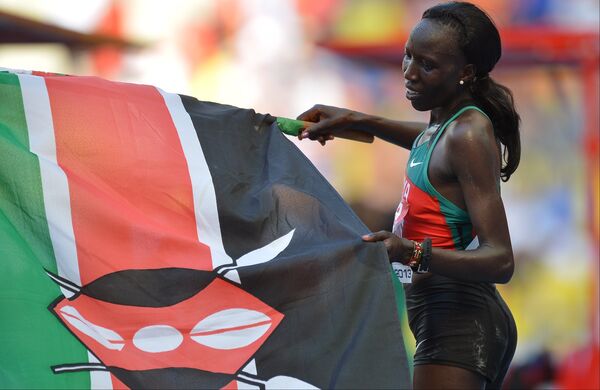 Battling hot and humid temperatures, which soared close to 30 degrees Celsius, Kiplagat overcame a neck-and-neck battle Straneo at the 40km mark, bursting ahead to finish with a time of 2:25:44 hours. Straneo, the Italian national record holder, ended up 14 seconds back at 2:25:58 hours, setting a season-best mark.

The gold medal - the first awarded at the nine-day Moscow competition - signals redemption for the 33-year-old Kiplagat, who finished a lackluster 20th at the London 2012 Olympics. She had entered Moscow as the pre-race favorite and possible challenger to Paula Radcliffe's 10-year-old world record of 2:15:25 hours.

Straneo, her eyes behind a pair of dark sunglasses, controlled the pack for much of the race. The seventh-place finisher in London, she was an unlikely pace-setter in a field with Kiplagat and reigning Olympic gold medalist Tiki Gelana of Ethiopia.

Kiplagat ran a conservative race, holding back until 35 kilometers had past before making a push at Straneo. She overtook the Italian in the blink of an eye and carried a wide margin into the home stretch.

The race had started inside the downtown Luzhniki stadium, snaked outside along the Moscow River embankment toward the Kremlin before looping back to Luzhniki. Kiplagat entered the stadium to a standing ovation