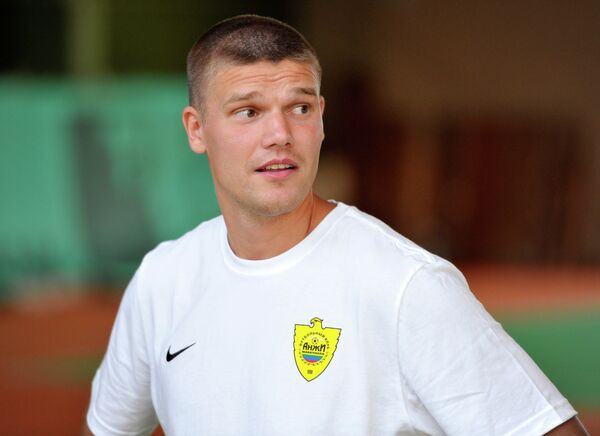 NB: This story has been updated with the last two paragraphs and corrected: The original version stated that Denisov had not played a game for Anzhi; in fact he has played three games for the team.

Denisov joined Anzhi in June but has failed to settle at the team based in Russia’s republic of Dagestan amid a reported falling-out with his new teammates.

Anzhi announced Wednesday it would stop the lavish spending that saw the Caucasus club chase European silverware and bring in international stars like striker Samuel Eto’o and midfielder Lassana Diarra.

“Now it’s possible to say with confidence that Denisov is becoming a Dynamo Moscow player – both sides have agreed a four-year contract,” the source said.

“In the near future the contract will be signed and it will be officially announced, because they want to end the proceedings before the Russian national team flies to London,” the source added, referring to Russia’s preparations for next week’s World Cup qualifier against Northern Ireland.

Denisov has played three times for Anzhi in the league so far.

Just a year ago, Denisov seemed one of the most stable players at three-time Russian champions Zenit St. Petersburg as he entered his 11th season with the team.

He then argued with Zenit management over pay and was dropped to the reserves before leaving for Anzhi at the end of the season.

Denisov has 37 caps for Russia and has captained the national side since Fabio Capello took over as manager last year. He is in the squad for Russia's clash with Northern Ireland.

Anzhi's chairman Konstantin Remchukov has said the club's new direction will mean "a lot of expensive players will leave," although the club said there would be no "mass sale."

Among those tipped to leave are Brazil winger Willian, who has been linked with Tottenham Hotspur, ex-Chelsea wing-back Yuri Zhirkov and striker Alexander Kokorin, who joined from Dynamo last month for around 19 million euros.