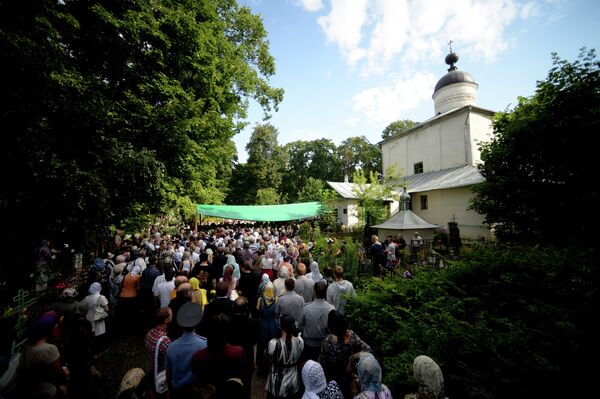 © RIA Novosti . Konstantin Chalabov
/
Go to the photo bank
Subscribe
The funeral of Pavel Adelgeim, the Orthodox priest stabbed to death in the northwest Russian city of Pskov earlier this week, took place Thursday in the presence of about 1,000 mourners at the Church of the Myrrh Bearers, where he served for the last decades of his life.

MOSCOW, August 8 (RIA Novosti) – The funeral of Pavel Adelgeim, the Orthodox priest stabbed to death in the northwest Russian city of Pskov earlier this week, took place Thursday in the presence of about 1,000 mourners at the Church of the Myrrh Bearers, where he served for the last decades of his life.

A religious dissident who lost a leg during a three-year stint in a Soviet prison camp, Adelgeim was one of only a handful of priests willing to publicly criticize the modern Orthodox Church.

He was killed on Monday evening by a man, reportedly suffering from an unspecified mental illness, who had been living at his house. Police have charged Moscow film school graduate Sergei Pchelintsev, 27, with his murder.

Adelgeim’s funeral, which took place outside the Church of the Myrrh Bearers under the open sky, was attended by about 1,000 people who spilled out onto the surrounding streets, local news site Informpskov.ru reported. He was buried in the graveyard attached to the Church.

Senior Pskov officials, including two deputy governors, were among the mourners, but no representatives from the local Orthodox Church hierarchy were present, according to a report by Dozhd television channel.

Adelgeim, who was 75, had been involved in a long-running dispute with the leadership of the local eparchy, which had stripped him of several positions. Most recently, he lost his title of head priest at the Church of the Myrrh Bearers in 2008.

Widely respected for the persecution he suffered under Communism, Adelgeim spoke out regularly against the leadership of the Orthodox Church, criticizing it for its cozy relationship with the Kremlin and public stance on feminist punk band Pussy Riot.

“At this age you greet every new day with thanks, as a gift from God, and regret that so much time has been wasted,” Adelgeim wrote in a blog entry three days before he was murdered. "It seems as if there are so many [days] to come, but they get spilt like sand and only the memories of the past remain."