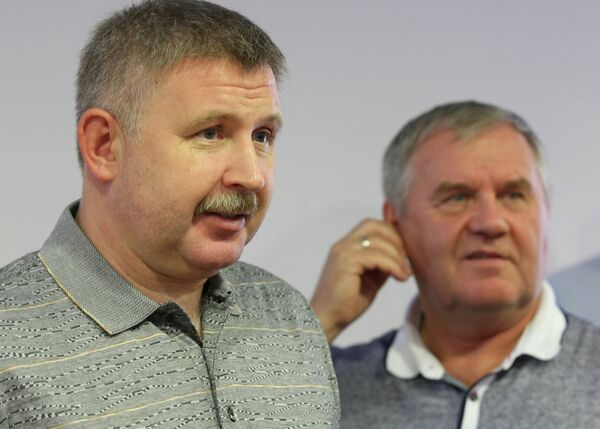 Investigators said Tikhonov plummeted from his fourth-floor apartment at 23 Novy Arbat St. while trying to repair a protective screen. He was 56.

“We share our deepest condolences with the family and friends of Vasily Viktorovich,” the federation said.

Tikhonov, a Moscow native, served as an assistant coach with the Sharks from 1993 to 1996, then another two with the Sharks' now-defunct American Hockey League affiliate, the Kentucky Thoroughblades. He moved the family to Finland for a three-year coaching stint in the SM-liiga and had a one-year sojourn in the Swiss league before helming CSKA Moscow in the old Russian Superleague from 2002 to 2004.

He switched into a consultant role for five years before returning to coaching in 2010 as an Avangard Omsk assistant. Tikhonov was last behind the bench as an assistant with Ak Bars Kazan in 2011-12.

Avangard sporting director Konstantin Bilan remembered Tikhonov as a wily tactician, who helped guide the club to a league-best 118 points in 2010-11 while primarily in charge of defensemen.

"He was always calm, considerate and had respect for the team," Bilan told R-Sport.

Tikhonov, however, lived largely in the shadow of his father Viktor, who led the Soviet Union to 10 world championships between 1977 and 1990 and is widely viewed as Russia’s all-time greatest national team coach. The elder Tikhonov, who is 83, also won gold at the Calgary Olympics in 1988 with the Soviet Union and with Russia at the Albertville Games four years later.

More recently, Vasily Tikhonov's son, also named Viktor, has been the family's flag bearer – a first-round draft pick of the Phoenix Coyotes in 2008, Viktor played 61 games over a single NHL season, scoring eight goals and eight assists. The 25-year-old is heading into his third season with SKA St. Petersburg in the Kontinental Hockey League.

Vasily Tikhonov is survived by his wife and son.