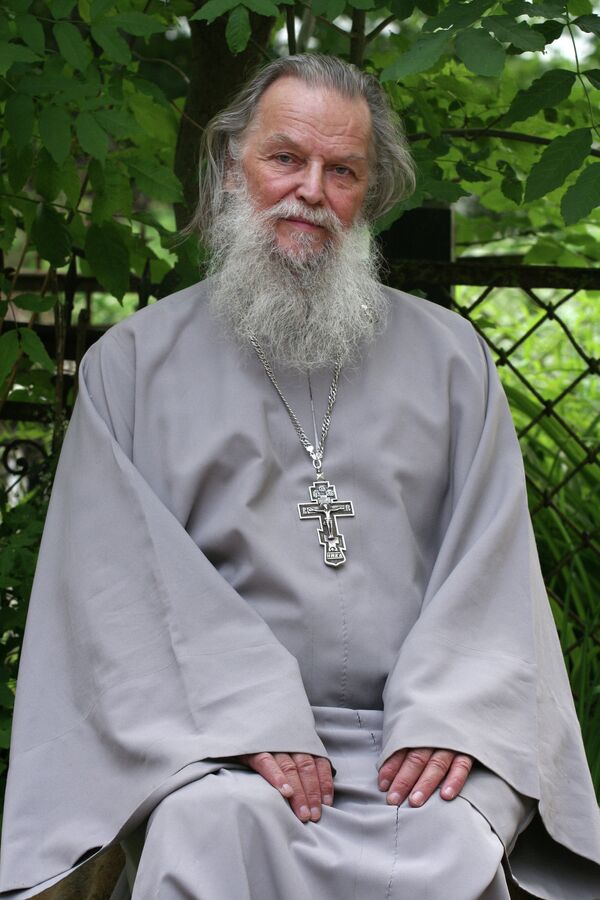 © RIA Novosti . Lev Shlosberg
/
Go to the photo bank
Subscribe
Pavel Adelgeim, the priest apparently killed in the western Russian city of Pskov on Monday evening, was a veteran of the religious struggle against the Soviet regime, and known as one of a few members of the Orthodox clergy willing to speak out against the Church hierarchy.

MOSCOW, August 5 (RIA Novosti) – Pavel Adelgeim, the priest apparently killed in the western Russian city of Pskov on Monday evening, was a veteran of the religious struggle against the Soviet regime, and known as one of a few members of the Orthodox clergy willing to speak out against the Church hierarchy.

“The last free priest of the Moscow Patriarchy has been killed,” prominent theologian Deacon Andrei Kurayev, wrote in a blog entry early Tuesday. “What priest, especially one with a family to feed, will now be able to say openly and publicly [to the bishop he is reporting to]: 'Your Eminence, you are wrong!'?”

Another theologian, Valery Otstavnikh, described Adelgeim in a blog entry on Russian radio station Ekho Moskvy's website as one of the Church's few "white ravens."

The exact circumstances of Adelgeim’s death remained unclear Tuesday, but officials said he died from loss of blood after a knife wound to the heart. Police quickly detained a man on Monday evening who they said was subsequently hospitalized for self-inflicted injuries, but would be questioned when he regained consciousness.

The attacker suffered from an unspecified mental illness and had lived with Adelgeim for several days, local lawmaker Lev Shlosberg told Dozhd television. The suspect in police custody was later identified as 27-year-old Sergei Pchelintyev, a graduate of Moscow’s Gerasimov Institute of Cinematography, one of the country’s top film universities, according to Russian media reports.

Adelgeim’s friends and admirers said Tuesday that the priest’s life had been marked by a consistent struggle for the truth as he saw it, and a fearlessness of both secular and religious authority.

His open defiance of the Soviet regime meant that, as a young priest, he spent three years in a Soviet prison camp – where he lost a leg. And he dramatically marked himself out from prevailing Orthodox opinion as recently as last year, when he called for leniency for feminist rock band Pussy Riot.

Two members of Pussy Riot are serving two-year prison sentences for a protest, which the band called a “punk prayer,” performed in Moscow’s Christ the Savior Cathedral shortly before Russia’s 2012 presidential election.

“There is a real confrontation beginning between the Russian Orthodox Church and civil society,” Adelgeim told Dozhd in an October interview, two months after the Pussy Riot members were convicted. “Instead of sitting down with these girls, and explaining that you have to pray to God in Church, they put them in prison!”

Adelgeim’s position was shared by only a handful of other Orthodox clerics and earned the disapproval of the head of the Russian Orthodox Church, Patriarch Kirill, who said last year that his "heart broke with bitterness" to hear religious people "downplay" Pussy Riot's actions. The Church used Pussy Riot to highlight a threat to the Orthodox faith and rally believers.

“You could say that Father Pavel saved the honor of the Russian Church,” Anna Shmaina-Velikanova, a professor of religious studies at the Russian State University for the Humanities, told RIA Novosti. “His remarks meant that non-Church people could say there were priests who stood up for [Pussy Riot].”

Adelgeim was also a vocal critic of the Orthodox Church’s alignment with the Kremlin, which has become increasingly marked in recent years, and he advocated greater independence for parish priests.

“The Church cannot be governed by vertical power; the Church is ‘sobornaya,’” he told Dozhd last year, referring to the Orthodox concept of sobornost; a spiritual unity and religious community based on tradition and freedom.

“The Church hierarchy and the authorities are one and the same outfit,” he said. “The Russian Orthodox Church is becoming a [government] department … responsible for ideology.”

But friends and acquaintances also stressed Adelgeim’s parish work and said the famous priest, whose father and grandfather were both executed under Communism, did not seek scandal for scandal’s sake.

“He conformed to the calling of a priest in the true sense of the word: He believed, he served, he didn’t try to make a career, and he lived a fully spiritual life,” Shlosberg, who had known Adelgeim for almost 20 years, said Tuesday in an interview with religious news site Portal-Credo.ru. “Father Pavel was the center of many peoples’ intellectual, moral and, you could say, physical salvation.”

Patriarch Kirill said he “mourned” the death of Adelgeim, who was a “victim of his pastoral duty,” according to a statement posted on the Moscow Patriarchy’s website late Monday.

Adelgeim’s had a long-running conflict with the Church hierarchy in the Pskov Region. In 2008 he was removed from his position as head priest of Pskov’s Church of the Myrrh Bearers, and he also lost the parish of Bogdanovo, a village in the Pskov Region where he helped build a church to serve the area’s psychiatric hospital in the 1990s.

An active user of the Internet in recent years, Adelgeim wrote a regular blog on Russian blogging site LiveJournal, as well as publicizing his views through newspaper articles and books. He was involved in several long-running court battles with local Church authorities over his dismissals.

Born in 1937, Adelgeim spent part of his childhood in an orphanage following the arrest of his parents. He accompanied his mother when she was exiled to Kazakhstan in the 1940s, a period that he later said was when he became interested in religion. He studied at Ukraine’s Kiev Pechersk Lavra in the 1950s, and was ordained in 1964.

Adelgeim first came to the attention of ordinary Russians, and recognized internationally, when he was arrested in 1969 and spent three years in a Siberian prison camp, convicted for slandering the Soviet state. He lost a leg below the knee during an accident involving a truck. In 1976 he became a member of the Pskov Eparchy, and was closely involved in the religious revival that took place around the area's famous Pechorsky Lavra in the last decade of the Soviet Union. He worked in the Pskov Region until the end of his life.

"At this age you greet every new day with thanks, as a gift from God, and regret that so much time has been wasted," Adelgeim wrote in a blog entry last week. "It seems as if there are so many [days] to come, but they get spilt like sand and only the memories of the past remain."

A funeral service for Adelgeim will be held on Thursday morning in Pskov’s Church of the Myrrh Bearers.