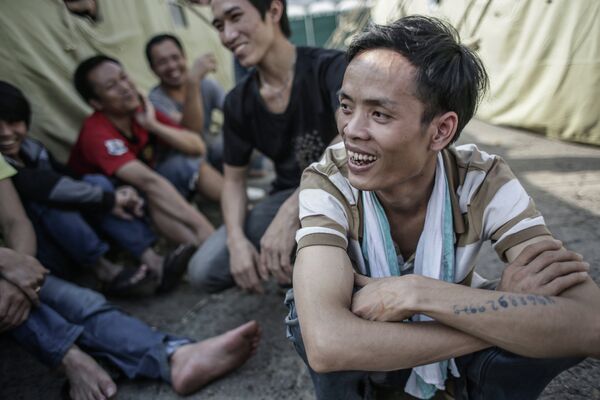 © RIA Novosti . Andrei Stenin
/
Go to the mediabank
Subscribe
International
India
Africa
A nationalist candidate in the Moscow mayoral race said Tuesday that hundreds of labor migrants placed in a tent camp in eastern Moscow ahead of possible deportation should get less food and be forced to work.

MOSCOW, August 6 (RIA Novosti) – A nationalist candidate in the Moscow mayoral race said Tuesday that hundreds of labor migrants placed in a tent camp in eastern Moscow ahead of possible deportation should get less food and be forced to work.

More than 600 people are being housed in green tents with bunk beds as of late Sunday in the camp after police detained some 1,400 migrants, mostly from Vietnam, over alleged violations of migration rules. Immigration has become a central issue in the run-up to Moscow’s mayoral election, with several candidates calling for tougher regulations.

Mikhail Degtyaryov, who represents the nationalist Liberal Democratic Party of Russia (LDPR), said the detained migrants’ food rations should be reduced and they should work to “benefit” Moscow and reduce government expenses on the camp and their future deportation.

The rations “should be changed based on minimal and traditional norms for illegal migrants, e.g. instant noodles, bread, tea,” the 32-year-old lawmaker said in an open letter sent to the head of the Federal Migration Service.

Degtyaryov also thinks that the city should "use their labor for the benefit of Moscow and Muscovites," the letter said. "They can sort garbage, clean the streets of Moscow, improve Moscow parks and squares.”

Degtyaryov also thinks that the countries the detained migrants come from should “compensate” Russia's expenses for the camp as well as deportation.

LDPR and its flamboyant leader, Vladimir Zhirinovsky, are known for their controversial rhetoric.

Under Russian law, detained foreigners are supposed to be kept at special centers for non-citizens. But Moscow authorities ran out of space for such detainees last week after police rounded up about 3,000 in a series of raids.

Members of the Kremlin’s human rights council, including the country’s chief rights ombudsman, Vladimir Lukin, inspected the camp on Friday and said the tents were overpopulated and lacked cleanliness.

Economic growth driven by revenues from oil exports and a dwindling domestic labor force have made Russia a magnet for millions of labor migrants, mostly from the former Soviet republics of Central Asia. Some 11.3 million foreigners entered Russia this year, of whom 3 million work illegally, Federal Migration Service chief Konstantin Romodanovsky said in late July.

Labor migration has triggered xenophobia and hate attacks and has become a focal point in campaigning for Moscow’s mayoral election, set for September 8.

Acting Mayor Sergei Sobyanin has made frequent calls for tougher measures against illegal migration. “The city currently has about 300,000 illegal migrants,” he said in an interview in June. "If we take away crimes committed by visitors, Moscow will become the most law-abiding city in the world."

The raids on Moscow markets and other migrant workplaces began last week in the wake of an attack on a police officer who was seriously injured at a market while trying to detain a suspected sex offender.