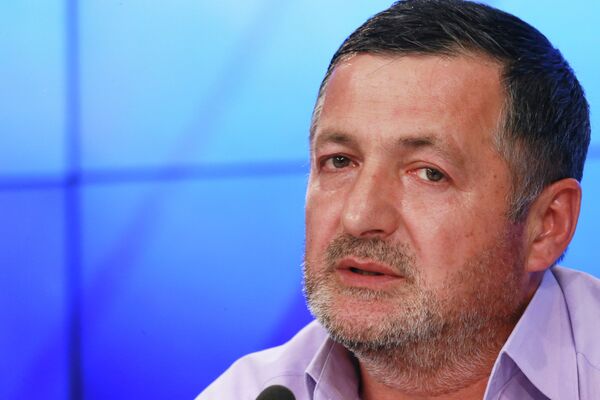 © RIA Novosti . Alexandr Natruskin
/
Go to the photo bank
Subscribe
The father of a Chechen immigrant shot dead by an FBI agent during questioning in connection with the Boston Marathon bomb attack was to meet Tuesday with lawyers in Florida and is considering a lawsuit against the FBI, civil rights groups said.

WASHINGTON, August 6 (RIA Novosti) – The father of a Chechen immigrant shot dead by an FBI agent during questioning in connection with the Boston Marathon bomb attack was to meet Tuesday with lawyers in Florida and is considering a lawsuit against the FBI, civil rights groups said.

Abdulbaki Todashev was to meet with representatives from the American Civil Liberties Union (ACLU) and the Council on American-Islamic Relations (CAIR), which is representing Todashev in connection with the shooting death of his son, Ibrahim Todashev, by an FBI agent during a May 22 interrogation in Orlando, Florida, according to Hassan Shibly, director of CAIR’s branch in Tampa, Florida.

“Basically we’re exploring the legal options that we have,” Shibly told RIA Novosti on Tuesday. “Our office should know in the next few weeks whether that involves a lawsuit against the FBI.”

Time Magazine reported Monday that Todashev plans to file a wrongful-death lawsuit against the FBI in order to force the agency to disclose details about his son’s shooting by a Boston-based FBI agent during an interrogation by several different law enforcement agencies.

At the time of his death, Ibragim Todashev, 27, was being questioned at his Orlando apartment about a triple murder in the Boston area and about his relationship to suspected marathon bomber Tamerlan Tsarnaev, who was killed during a shootout with police in the Boston suburb of Watertown four days after the deadly April 15 Boston attack.

Both Todashev and Tsarnaev moved to the United States from the former Soviet Union, and both men had ethnic and family roots in the volatile southern Russian republic of Chechnya.

Todashev had once lived in Boston and was a “casual friend” of Tsarnaev as both were involved at some point in mixed martial-arts fighting, the Orland television station WESH reported after Todashev’s death.

The report said that Todashev and Tsarnaev had spoken by phone or Skype for about five minutes around one week before the April 15 twin bomb attacks in Boston that killed three people and wounded more than 260 others. Tsarnaev was killed during a shootout with police several days after the attack.

“The only way to confirm if he was on the ground when he was shot – making the circumstances of his death a lot more questionable – is based on information in the autopsy,” he said. “We need to get that information.”

Accounts from law enforcement officials published by US media in the immediate aftermath of the shooting were contradictory, with some saying Todashev was armed with a knife and others saying he attempted to grab an FBI agent’s gun.

The Washington Post, however, cited an unidentified law enforcement official in May as saying that Todashev was not holding a gun or a knife when he was shot seven times by the FBI agent.

Shibly said CAIR had also uncovered what he called “very clearly illegal acts in the days leading up to the shooting,” including harassment of Todashev’s friends by investigators and purported threats by the FBI to jail two Russian citizens “of Chechen background” and revoke their US green cards if they did not spy on local Muslim “houses of worship” and restaurants frequented by Muslim clientele in the Orlando area.

Baylor Johnson, a spokesman for the ACLU of Florida, told RIA Novosti that while the prominent rights group’s representatives will meet with Todashev’s father on Tuesday, the ACLU does not participate in wrongful-death lawsuits.

Both the ACLU and CAIR, however, have fiercely criticized the official shroud of silence enveloping Todashev’s death.

CAIR filed a formal complaint with the US Department of Justice in June in connection with the case, while the ACLU last month called on Florida and Massachusetts to open their open their own investigations into the deadly shooting,

“Based on several of the reports, it seems unlikely that the agents were justified in using deadly force against a single unarmed suspect,” CAIR’s civil rights director, Thania Diaz Clevenger, said in the complaint. “The circumstances surrounding the shooting are at the very least alarming.”

“Florida officials are simply deferring to the FBI, allowing the FBI to investigate itself, but it is difficult to accept the FBI’s honesty in this matter,” the ACLU wrote in a July 22 letter to Commissioner Gerald Bailey of the Florida Department of Law Enforcement, adding, “Now, more than eight weeks later, the public has very little information about this incident.”

Authorities in Massachusetts and Florida have refused to investigate Todashev’s death independently, leaving his survivors little recourse other than a civil suit to force disclosures about the circumstances of the shooting, ACLU staff attorney Yvette Acosta MacMillan told Time this week.

“They would be able to obtain the records and the information through discovery in a lawsuit because right now, none of the information, none of the documents are being released,” the attorney, who works in the organization’s Florida chapter, was quoted by Time as saying.