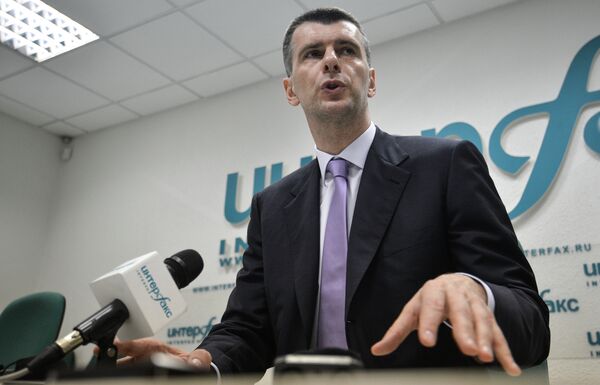 Billionaire Mikhail Prokhorov’s political party has been withdrawn from elections in Yaroslavl, after the Russian city’s mayor, who backed the party, was arrested on corruption charges, news reports said Monday.

A local court on Monday approved recent decision by the Yaroslavl Region’s election committee to remove the Civic Platform party from the elections for the city legislature, online newspaper Gazeta.ru reported.

Election authorities banned the party from the vote, set for September 8, because the party had failed to open a bank account for its campaign before the deadline.

Civic Platform representatives said the party could not open the account because police had detained the party member tasked with doing so and released her after the deadline had passed. Local officials denied that accusation.

The region became a notorious hotbed of political dissent after giving the pro-Kremlin United Russia party its lowest score at the parliamentary elections in 2011 among all 83 Russian regions.

Last year, the region defied the Kremlin again when it picked the independent Yevgeny Urlashov for Yaroslavl mayor, making him the only head of a regional capital in Russia not affiliated with United Russia.

Urlashov was arrested on bribery charges last month, soon after he backed Prokhorov’s party for the September vote. The mayor, himself a former United Russia member, maintained innocence and insisted that police fabricated the case in retribution for his taking on the ruling party.

Russia faces a round of regional elections on September 8. The liberal Civic Platform, which was created last year, also saw problems in the Siberian city of Tyumen, where all of the party’s single-mandate candidates were removed from the elections for the city parliament on Monday over paperwork problems, Nakanune.ru news website reported.

Prokhorov, 48, whose fortune was estimated at $13 billion this year by Forbes Russia, entered politics in 2011, unsuccessfully attempting to participate in the parliamentary elections. He also squared off against Vladimir Putin in the presidential race of 2012, finishing third with about 8 percent of the vote.

Prokhorov has been keeping a low political profile since, fighting allegations of being a Kremlin spoiler and insisting that he has focused on grassroots work, building a strong party for future elections.