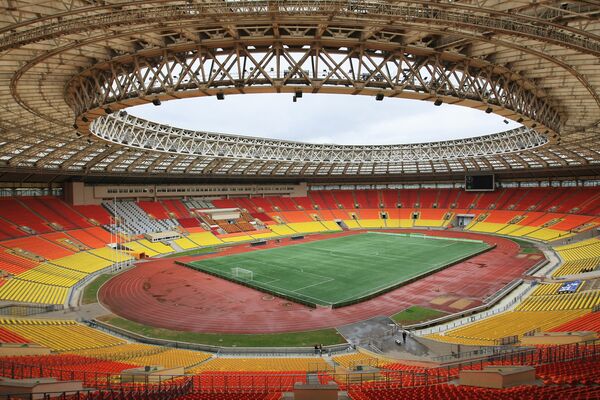 Back in April, Lamine Diack, the hoary, longstanding Senegalese president of the International Association of Athletics Federations, sat down at a City Hall meeting with Moscow’s mayor and flatly criticized Russian President Vladimir Putin and Prime Minister Dmitry Medvedev for the country’s ham-fisted efforts at advertising the world athletics championships, to be held in Moscow on August 10-18.

MOSCOW, August 5 (R-Sport) – Back in April, Lamine Diack, the hoary, longstanding Senegalese president of the International Association of Athletics Federations, sat down at a City Hall meeting with Moscow’s mayor and flatly criticized Russian President Vladimir Putin and Prime Minister Dmitry Medvedev for the country’s ham-fisted efforts at advertising the world athletics championships, to be held in Moscow on August 10-18.

Ticket sales were poor and, around the capital, Diack pointed to an alarming dearth of billboard ads and television commercials. Russian officials, he suggested, seemed more interested in promoting the World University Games, which ran in mid-July, and next February’s Sochi Olympics.

Others involved in the planning were also bracing themselves for a poorly attended disaster, with IAAF vice president and International Olympic Committee presidential candidate Sergei Bubka warning the second-biggest track and field event after the Olympics would be an utter failure if downtown Luzhniki Stadium, already reduced in capacity to 35,000 from 78,000, wasn’t full.

Since then, total tickets sales have ballooned from about 44,000 to 273,000 over nine days – roughly half the reported total at the 2011 championships in Daegu, South Korea – with sellouts secured for the final weekend, prompting the IAAF to issue Moscow organizers a vote of confidence.

And yet, dark clouds loom over the biennial championships, the highest-profile international sporting event Russia has hosted since the 1980 Moscow Olympics.

In the flagship event, the 100m, Usain Bolt's quest to vanquish his Daegu nightmare - the Jamaican was disqualified in the final for a false start - has eased considerably with the doping suspensions of the fastest men in the world this year Tyson Gay and Asafa Powell, while a hamstring injury has ruled out reigning champion Yohan Blake.

American Justin Gatlin, a former world champion, is likely Bolt’s only threat at topping the podium.

Other absences diluting the appeal of the event include those of sprinters Sherone Simpson of Jamaica and three-time Olympic champion Veronica Campbell-Brown, who were also nabbed for doping in the summer.

South African Paralympic runner Oscar Pistorius, who broke onto the able-bodied scene at the 2011 championships, is defending murder charges in the shooting death of his girlfriend, and, less controversially, London Olympic gold-medalist heptathlete Jessica Ennis-Hill of Britain will stay home with an Achilles injury.

In the 400m, Grenada’s Kirani James, a gold medalist in Daegu and London, will go head to head with 2008 Olympic champion LaShawn Merritt of the United States, who was unable to defend in London after pulling out with an injury.

Injuries have ravaged the 800m, with Kenya's David Rudisha, the reigning world champion and world record holder at 1:40.91, bailing out of Moscow with a knee injury. London silver medalist Nijel Amos of Botswana - who won gold at the World University Games in Kazan last month - has also withdrawn with a bum quad, leaving the podium open to the likes of unproven runners Duane Solomon of the United States and France's Pierre-Ambroise Bosse. Kenyan Timothy Kitum, the London bronze medalist, did not make the cut for Moscow.

While the decathlon does not contain the star power of the sprints and middle-distance running events, it may boast the most attention-grabbing storyline with American Ashton Eaton, the 2011 gold medalist and London silver medalist, squaring off against another American, Trey Hardee, who took silver in Daegu and gold in London. Cuba’s Leonel Suarez, who won bronze in Daegu and London, will look to bump Eaton and Hardee.

On the women’s side, New Zealand shot putter Valerie Adams will land in Moscow seeking her fourth-straight gold at the world championship and, perhaps, the opportunity to put a candle on her London 2012 gold, which was awarded after Belarus’ Nadzeya Ostapchuk, the Daegu silver medalist, was stripped of the title after failing a drug test.

In the 100m hurdles, American Lolo Jones, who has never quite lived up to the hype surrounding her before Beijing, did not qualify for Moscow and is training for a spot on the US Olympic bobsled team. Her absence sets the stage for London silver medalist Dawn Harper and American up-and-comers Queen Harrison and Brianna Rollins, who will try to knock off Australian star Sally Pearson, the reigning world and Olympic champion, for a podium sweep.

The 800m, meanwhile, will be without Daegu silver medalist South Africa’s Caster Semenya, the 2009 gold medalist and silver-medal winner in Daegu and London. Semenya, who was at the center of a gender controversy following the 2011 championships, failed to make the South African squad, running 0.36 behind the qualifying time at a race in Belgium last month.

Flocking to Moscow this week are a record-breaking 1,974 athletes from 206 nations. The United States led the 2011 championships with 29 medals, including a table best nine gold. Russia finished second with 17; Jamaica was third with 12.

Off the track, organizers are facing heightened security concerns in the wake of the Boston Marathon bombings in April and the recent reemergence of fugitive Islamist leader Doku Umarov, who has called for violent attacks on the Sochi Games. And while the worlds have proved resistant to deepening global anger over Russia’s contentious anti-gay legislation, which has provoked calls for an Olympic boycott, it remains to be seen how long that will last.