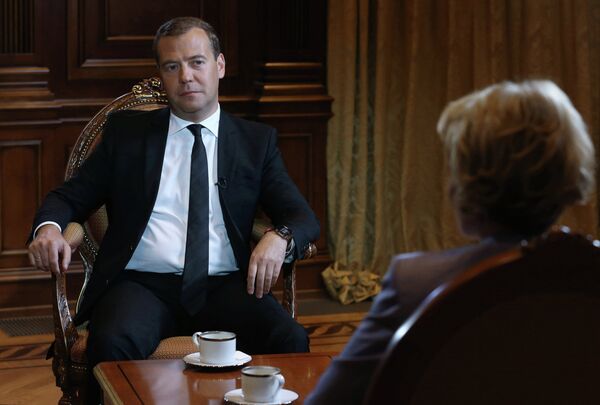 © RIA Novosti . Yekaterina Shtukina
/
Go to the mediabank
Subscribe
International
India
Africa
Russian Prime Minister Dmitry Medvedev criticized on Sunday the West’s interference in the Middle East, describing it as a “bull in a china shop.”

MOSCOW, August 4 (RIA Novosti) – Russian Prime Minister Dmitry Medvedev criticized on Sunday the West’s interference in the Middle East, describing it as a “bull in a china shop.”

In an interview with Russia Today international news TV channel, Medvedev said he agreed with the interviewer that the West often purposefully pushed whole nations to the point of no return, beyond which it was very difficult to convince the warring sides to attempt negotiations.

“Our Western partners sometimes behave like a bull in a china shop – they squeeze in, crush everything and then don’t know what to do next. I often find myself astonished at their analysts and how inconsistent their projects are that they push through by their superiors and at the outcomes they get,” Medvedev told Russia Today.

“If we’re being completely honest, what good did the Arab Spring bring to the Arab world? Did it bring freedom? A little, at best. In most countries it led to endless bloodshed, regime change, and continuous unrest. I have no illusions about that either. As for the pushing you mentioned, yes, unfortunately, that’s true,” Medvedev said.

What happened in Libya and Iraq and what is happening in Syria show that there is a forceful dismantling of a country’s political system under the guise of the fight for national interests, an intrusion into its internal affairs and the installation a loyal political regime, Medvedev said.

“Nothing good came out of it, by the way. We know what happened and we can see what is happening. The situation in Iraq is very volatile – dozens of people are killed every day... Of course, we are doing our best to support Iraq. We meet with Iraqi leaders; we sympathize with them, because we have a long history of contacts with them,” the Russian premier said.

“Libya was torn apart by this war, and there are still regions where the central authorities have not managed to regain full control, just like we expected. This is not to mention what happened to [Libyan leader Muammar] Qaddafi. This was horrible. This is another stain on the reputation of the people who initiated this military operation,” Medvedev said.

Syria is also on the brink of a similar war, the Russian premier said.

“Basically, there’s a civil war raging in the country; it's a disaster. We have always believed that the power to solve Syria's problems should lie with its people. But the active interference that we now see might potentially lead to the same problems and create yet another unstable country, in a permanent state of civil war,” Medvedev said.