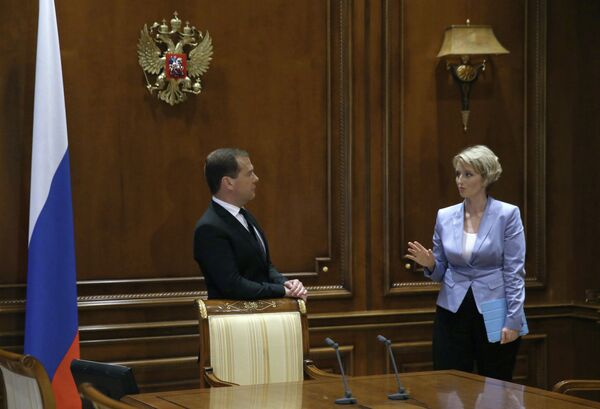 Russian Prime Minister Dmitry Medvedev said on Sunday he looked optimistic about the prospects of bilateral relations between Russia and Georgia five years after a brief war between the two countries.

MOSCOW, August 4 (RIA Novosti) – Russian Prime Minister Dmitry Medvedev said on Sunday he looked optimistic about the prospects of bilateral relations between Russia and Georgia five years after a brief war between the two countries.

“In this regard, I'm a total optimist. I'm convinced that everything will be fine. Our peoples aren't enemies,” Medvedev said in an interview with Russia Today international news TV Channel.

“Of course, the conflict didn't help but it wasn't based on deep-running disagreements. Again, that was a criminal mistake of certain leaders. But these days the situation is indeed a bit different. The country's new leadership that was brought in by the political and constitutional reforms is taking a more pragmatic stance... We welcome that,” Medvedev said.

The Georgian Dream coalition led by current Prime Minister Bidzina Ivanishvili won the October 1, 2012, parliamentary election, forcing the United National Movement, which had ruled Georgia since the Rose Revolution in 2003 and is led by President Mikheil Saakashvili, into the opposition.

The elections were vital in the light of a law passed in 2010 transferring the majority of the president’s executive powers to the prime minister when Saakashvili’s second term ends in the fall of 2013.

Georgia’s new government, elected in the October 1, 2012 polls, said normalizing ties with Russia was among its top priorities.

Medvedev said it was not Moscow that had cut diplomatic relations with Georgia.

“We are ready to reaffirm them on certain conditions. And those conditions are simple - just recognizing what happened. This process may be very delicate and complex. But I’m sure there’s no going back, and when Saakashvili and some other people who participated in taking this criminal decision [to launch an offensive on South Ossetia] are gone, we will turn the page and close this sad chapter in our relations.”

Medvedev also said the peoples of Georgia, Abkhazia and South Ossetia would themselves decide how to develop their relations.

“The choice lies with the people who live there, the people of Georgia and the leaders they elect.  The people of Abkhazia and the people of South Ossetia have the power to give their leaders any kind of mandate, and this will be constitutional and in line with universally-recognized  international practices,” Medvedev said.

“We want them to live in peace. But it’s up to them to decide what relations they will have with each other. We will not interfere with these processes. But of course, we will defend Russia’s national interests.”