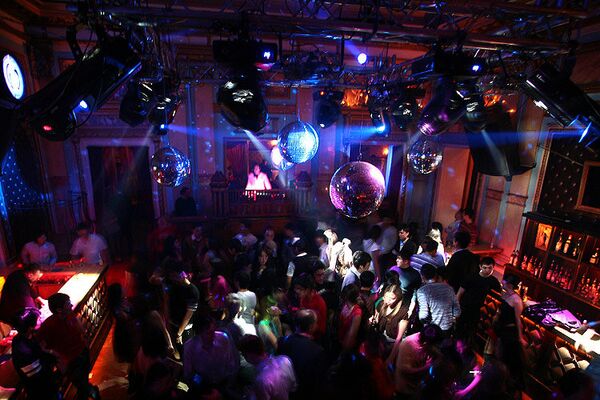 A young couple from a southern Ukrainian town faces up to 4 years in jail for getting down on each other during a nightclub party, Ukrainian media reported.

MOSCOW, August 3 (RIA Novosti) – A young couple from a southern Ukrainian town faces up to 4 years in jail for getting down on each other during a nightclub party, Ukrainian media reported.

The unidentified young man and woman that performed oral sex on each other at the Roza Vetrov nightclub in the Black Sea town of Koblevo may be charged with hooliganism, Mikolayiv region police spokeswoman Olga Perederenko told the TSN news website. The offense is punishable by up to four years in jail, according to the Ukrainian criminal code.

The incident occurred during a contest of young couples that were promised 200 hryvnas ($25) for cutting loose on the dance floor. Of two couples that volunteered to dance stark naked, only one agreed to engage in oral sex while dancing. As seen in an online video, the young man held his partner upside down, and both managed to stimulate each other orally – and won the money.

Online videos with the incident went viral in Ukraine earlier this week, and the Svoboda radical nationalist party reportedly called on authorities to find and prosecute the couple.

“Such cases are very troubling since the licentiousness of youth … deals a powerful blow to traditional family values and imperils the future of society,” Demid Gubsky of Svoboda’s Mikolayiv branch told the Mukola.net website.