500 Migrants Placed in Moscow Tent Camp Ahead of Deportation – Police 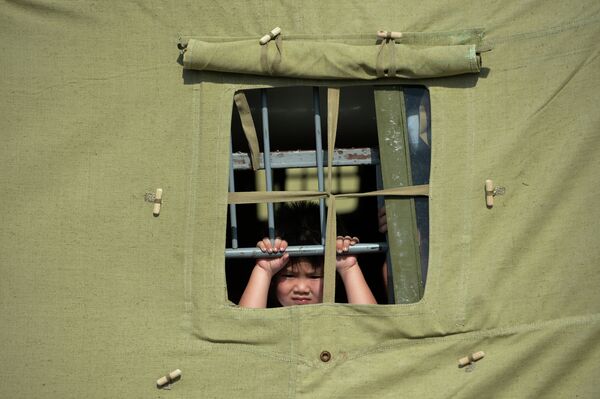 Police said Saturday that 500 labor migrants have been placed in a tent camp in Moscow ahead of their deportation from Russia for violating migration rules.

MOSCOW, August 3 (RIA Novosti) – Police said Saturday that some 500 labor migrants have been placed in a tent camp in Moscow ahead of their deportation from Russia for violating migration rules.

Some 1,400 foreigners, most of them Vietnamese nationals, have been detained earlier this week during marketplace raids that targeted labor migrants throughout Moscow. A tent camp was set up for them in the eastern Golyanovo district because the city ran out of places to keep them.

Moscow police press service told RIA Novosti that the number of “guests” in the camp that consist of some 200 green tents capable of hosting up to 900 people reached 500 by late Saturday.

Most of the detained migrant laborers reportedly lived and worked in illegal conditions within buildings raided by police. All the migrants, reportedly also including eight suspected bosses from Iraq, Syria, Vietnam and Azerbaijan, have been detained on suspicion of immigration offenses.

Revenues from oil exports and dwindling labor force made Russia a magnet for millions of labor migrants, mostly from ex-Soviet Central Asia.

Labor migration has triggered xenophobia and hate attacks and has become a focal point in the run-up to Moscow’s mayoral election set for early September.

updates with new number of migrants