Russia a Hotbed of Android Malware Scam – US Firm 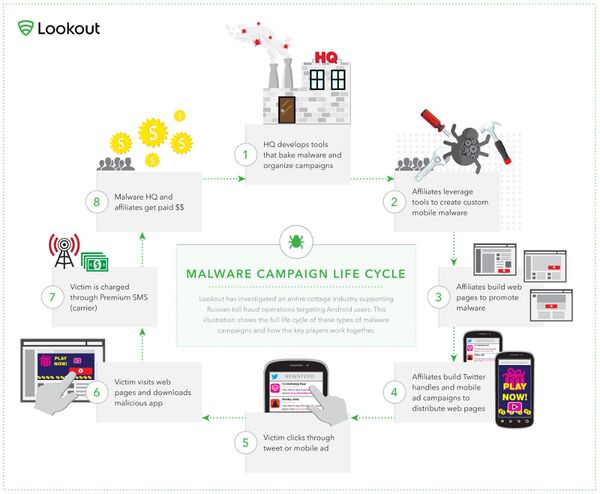 © Lookout
Subscribe
Cybercriminals are running massive, well-organized schemes to steal money from Android smartphone users in Russia by duping them into downloading malware promoted through online platforms like Twitter, according to a new report released Friday by the US mobile security company Lookout.

WASHINGTON, August 2 (RIA Novosti) – Cybercriminals are running massive, well-organized schemes to steal money from Android smartphone users in Russia by duping them into downloading malware promoted through online platforms like Twitter, according to a new report released Friday by the US mobile security company Lookout.

The company tracked 10 groups that create malware tweaked to look like regular apps that are downloaded to Android phones and send off text messages from the mobile device that cost the user from $3 to $18 dollars, Lookout said in the report presented Friday at the Defcon hacker convention in Las Vegas.

The funds then end up in the pockets of the scam artists via the mobile provider.

“The typical victim of this malware scheme is a Russian speaker searching for popular applications such as Skype or for free [pornography], videos, pictures and MP3s,” the company said in the report.

Ryan Smith, a senior researcher and response engineer with Lookout, told PC Magazine that 30 percent of this fraudulent text-message malware the company has detected emanates from Russia, of which 60 percent can be traced to the 10 cybercrime groups it has tracked since December for the study.

Most of these scams do not work outside of Russia and other countries in the former Soviet sphere, PC Magazine reported.

The malware is constantly being updated by these groups and is distributed through affiliates who tweak it to resemble apps or songs that are then downloaded by unwitting Android users who are targeted in Twitter and other online and mobile marketing campaigns, Lookout said.

These affiliate marketers have earned between $700 and $12,000 per month from the groups organizing these scams, which pay the affiliates like a normal company pays its employees, Lookout said in the report.

“Based on the investigation of the sites involved, we estimate that there are thousands of marketing affiliates and potentially tens of thousands of affiliate websites involved in promoting these pieces of malware,” the company said.

Programmers of the malware are able to obscure their activities by deleting evidence of the surreptitious text messages from an Android user’s device, according to Lookout.

“Russians are very smart and clever,” Smith said, the Los Angeles Times reported Friday. “They are starting a trend showing that text-message fraud can be commoditized, and it’s important for us to look at their tools and tactics to keep it from spreading.”