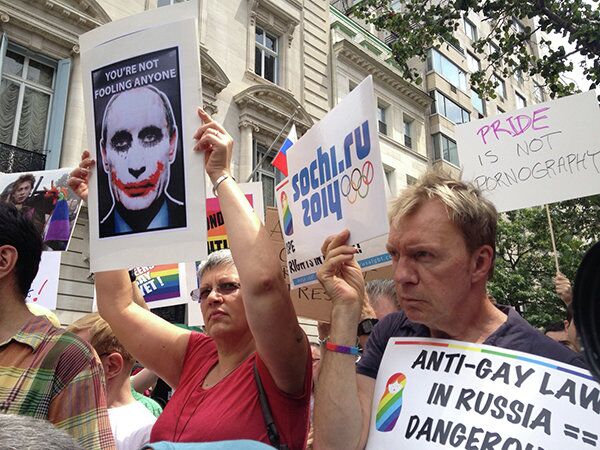 © RIA Novosti . Dan Elias
Subscribe
Politics, it has been said, makes strange bedfellows. Now, as US gay rights groups protest against Russia’s new laws on homosexuality, conservatives across America have quietly begun to align themselves with the Russian government in a rare union that defies a long history of animosity.

WASHINGTON, August 2 (By Maria Young for RIA Novosti) – Politics, it has been said, makes strange bedfellows.

Now, as US gay rights groups protest against Russia’s new laws on homosexuality, conservatives across America have quietly begun to align themselves with the Russian government in a rare union that defies a long history of animosity.

“Russia could be a great ally for conservatives, on issues like defending the family, abortions, even strengthening marriage and promoting more children,” said Larry Jacobs, managing director the World Congress of Families, an Illinois-based organization that promotes traditional family values in the US and abroad, in an interview with RIA Novosti.

Next year the group plans to hold its eighth annual International Congress in Moscow, a move Jacobs said was “absolutely” an indication of support for Russia’s growing conservative stance on a number of social issues.

Other conservative groups are also joining what might seem to be an odd alliance.

"We fully support the widespread notion in Russia that homosexuality has no place in the teaching of children. We also welcome the leading role Russia is taking on this issue at the United Nations,” said Austin Ruse, president of the Catholic Family & Human Rights Institute, a US-based non-profit research group that works to defend life and family values around the world, in a statement to RIA Novosti.

“Russians do not want to follow America’s reckless and decadent promotion of gender confusion, sexual perversion, and anti-biblical ideologies to youth,” said Peter LaBarbera, president of Americans For Truth About Homosexuality (AFTAH), a group “dedicated to exposing the homosexual activist agenda,” in a statement on the organization’s website.

US conservatives have long opposed communist ideology and limitations of freedoms that were once the law of the land in the Soviet Union, a state the late US President Ronald Reagan once called an “evil empire.”

“For 70 years we fought the communists, and some conservatives still associate Russia with a far left communist country, when the reality is, among the more powerful nations, Russia is one of the most conservative countries in the world,” Jacobs said.

In June, the group endorsed Russia’s ban on the promotion among minors of “non-traditional relationships.” Proponents both in Russia and in the United States argue that it shields children from harmful influences.

But the new law has outraged the Lesbian Gay Bisexual Transgender (LGBT) community and its supporters in the United States and elsewhere. They claim it potentially criminalizes everything from wearing a rainbow lapel pin to gay couples holding hands in public and effectively encourages persecution of homosexuals.

“A few marginal figures on the American anti-gay right, having lost the battle to criminalize and stigmatize homosexuality in the US, are now turning to foreign markets which they perceive as more receptive to their agenda,” said Jonathan Rauch, Senior Fellow in Governance Studies at the Brookings Institute and author of “Gay Marriage: Why It Is Good for Gays, Good for Straights, and Good for America.”

Conservatives say while they reject homosexuality, they also oppose violence.

"We deplore and condemn all forms of violence visited upon anyone including lesbians, gays, bi-sexuals and the transgendered,” said Ruse.

It is “a strange twist of historical fate” for conservative groups to look to Russia “as the world's foremost defender of traditional values,” said James Kirchick, an international journalist and fellow at the Foundation for the Defense of Democracies, a Washington-based non-profit policy institute.

“After all, Russia today under the heel of President Vladimir Putin is arguably less free than it was in the late stages of the Soviet Union under Mikhail Gorbachev,” Kirchick wrote in an article in The Daily Beast.

Really, he wrote, the conservative’s new enthusiasm for men inside the Kremlin, “has everything to do with the Russian government’s anti-gay crackdown, a crackdown they relish seeing take place here in America.”

Not so, said Jacobs, the head of the World Congress of Families.

“Russians, a lot of those in the Orthodox Church and pro-family groups, they want to see Russia return to some stability and that only comes thru strong values and a return to morality,” he said, something he would welcome in America.

“But if you’ve ever seen what happens at a gay pride, there is pornography, they mimic sexual acts, there’s nudity. It is not just people wearing rainbow colors. If all they did was wave flags, that’d be great, I just haven’t seen one where that’s the case,” he added.