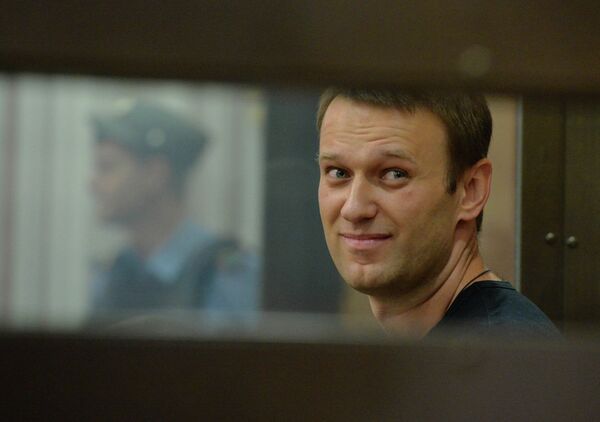 © RIA Novosti . Ilya Pitalev
/
Go to the photo bank
Subscribe
Russian President Vladimir Putin said Friday that a recent real jail term for his vehement opponent Alexei Navalny was “strange,” given that another defendant in the case got away with a suspended sentence.

MOSCOW, August 2 (RIA Novosti) – Russian President Vladimir Putin said Friday that a recent real jail term for his vehement opponent Alexei Navalny was “strange,” given that another defendant in the case got away with a suspended sentence.

Whistleblowing blogger Navalny was given five years in jail last month on embezzlement charges that he dismissed as fabricated by the Kremlin. Meanwhile, a businessman who pleaded guilty over the same case – under pressure, Navalny claimed – was given a 4 1/2-year suspended term earlier.

“I found it strange, I admit, that one defendant, who cooperated with the investigators, you know, got a suspended 4 1/2-year term, while another defendant, whom you mentioned, was hit with a real term of five years,” Putin said when asked about Navalny during a visit to a youth forum at Lake Seliger in central Russia.

“But it’s up to the court to establish what’s what,” Putin said.

He added, however, that anti-corruption crusaders must be “flawless” and “not just make noise and shout ‘stop the thief,’ but also put forward some platform and be reasonable and not aggressive about it.”

Navalny, who was released from detention pending an appeal, is currently campaigning for the Moscow mayoral election, set for September 8. The 37-year-old activist, who voiced presidential ambitions in the past, made a name for himself though anti-corruption exposés and acerbic blog posts targeting Russia’s ruling establishment.

Though Putin never said Navalny’s name when answering questions about the activist, he claimed credit for Navalny’s emergence.

“Everything that happens in our country’s politics, … all these people are partly the result of my actions,” Putin said at Lake Seliger.