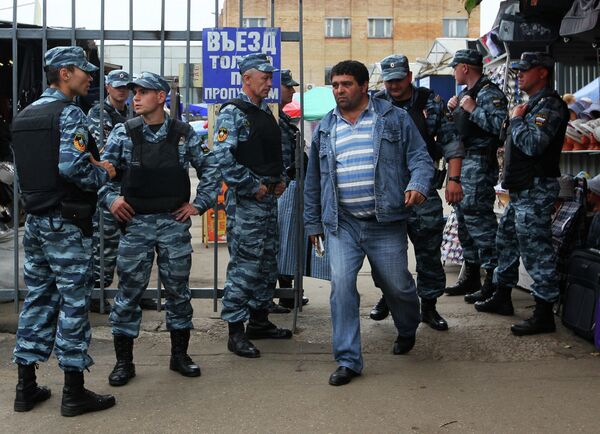 © RIA Novosti . Ruslan Krivobok
/
Go to the photo bank
Subscribe
Moscow police detained over 1,675 migrants at a construction site on suspicion of involvement in criminal activity, law enforcement officials said Friday, as the authorities continued a sweeping series of raids targeting migrant workers across the city.

MOSCOW, August 2 (RIA Novosti) – Moscow police detained over 1,675 migrants at a construction site on suspicion of involvement in criminal activity, law enforcement officials said Friday, as the authorities continued a sweeping series of raids targeting migrant workers across the city.

The foreigners, who came from Turkey and Central Asian countries, were detained in northern Moscow and taken to police precincts “to be identified and checked for involvement in earlier crimes.” The raid is the latest in a campaign that officials say aims to “decriminalize” the city, and that has mainly targeted migrant workers.

As a result of the inspection at the building site, 59 people were charged with violating Russian law when entering the country, 15 of whom are now waiting for court rulings on their possible deportation.

A criminal case has been opened into the organization of illegal migration.

On Thursday, the city police reported the detention of about 1,600 other migrants during raids launched this week in the wake of an attack on a police officer who was seriously injured at a Moscow market when attacked by an angry mob at the weekend.

The incident has fueled ethnic tensions in the capital, whose marketplaces and construction sites employ many migrant workers from former Soviet states and representatives of ethnic minorities from Russia’s Muslim-populated North Caucasus regions.