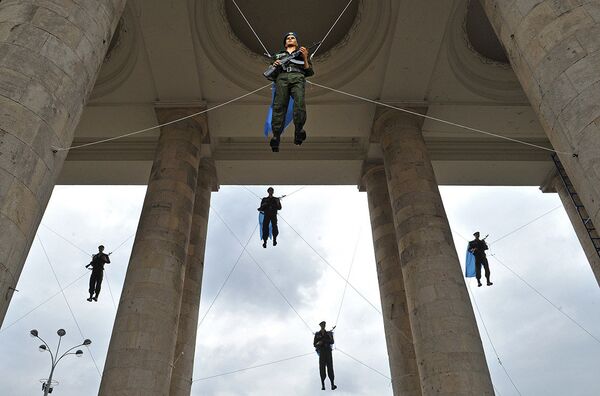 Retired troopers celebrate in parks and public squares on August 2 every year, turning out in their trademark blue-and-white striped tank tops and blue berets to drink, sing, paddle about in fountains and smash empty bottles over their heads to prove they are real tough guys.

In some parts of the country, local authorities took the preventive measure of draining their fountains and switching the water off.

One of their favorite Moscow haunts is the downtown Gorky Park, which this year marked the event by suspending half a dozen mannequins in military fatigues on wires in the air high over its gates.

The installation was modeled on “Golconda,” a 1953 painting by French surrealist painter Rene Magritte that depicts rows of human figures floating in the air, Russian media cited a park official as saying.

The allusion, however, was lost on most paratroopers and ordinary Muscovites, who complained they mistook the mannequins for real people hung from the gates, news site Rusnovosti.ru reported.

“In old Rus, they used to hang thieves and murderers over the gates,” quipped one blogger widely cited by national media.

The mannequins were promptly taken down after paratroopers’ complaints, a spokesperson for the park administration told RIA Novosti later the same day.

Gorky Park, a popular Moscow recreational area since the Stalin era, has undergone a radical revamp since 2011, complete with free Wi-Fi, dance floors, yoga classes and outdoor film screenings, which has seen it become a regular hang-out spot for the hipster crowd.

Unidentified park visitors filled the fountains that the ex-paratroopers frolic in with dozens of yellow rubber ducks Friday, publishing a short video of their actions on YouTube. No complaints have so far been reported.

Park administration also stocked up on 17 tons of watermelons, available free for the celebrating servicemen who traditionally entertain themselves by smashing the fruit with martial arts blows.