Ukrainian-Born Thief Charges $100 an Hour for US Charity Work 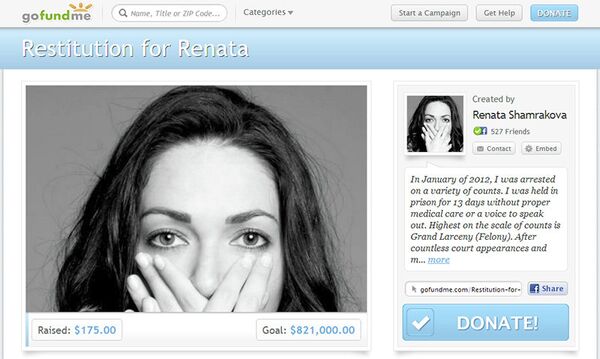 © gofundme.com
Subscribe
A Ukrainian-born US woman convicted of stealing nearly $1 million from her boss has launched a campaign to raise restitution costs by charging $100 an hour to perform community service.

WASHINGTON, August 1 (RIA Novosti) – A Ukrainian-born US woman convicted of stealing nearly $1 million from her boss has launched a campaign to raise restitution costs by charging $100 an hour to perform community service.

Renata Shamrakova, who was convicted in March of stealing more than $900,000 from her boss, New York hedge fund manager Todd Meister, is offering to perform 10 hours of community service in exchange for $1,000 in a crowdsourcing campaign to raise $821,000 in court-ordered restitution costs, according to the web page devoted to the campaign.

Shamrakova, who claims to have been taught “the value of hard work” by her Ukrainian immigrant parents while growing up on Long Island, New York, faces up to three years in jail if she cannot repay the debt to Meister, the ex-husband of celebrity socialite Paris Hilton’s sister, Nicky Hilton.

Shamrakova, 28, worked as a personal assistant to Meister and pleaded guilty in March to charges of grand larceny and tampering with evidence after using her bosses credit cards to purchase clothing, furniture, thousands of pieces of jewelry, and international travel to Aruba, Canada, Italy and France in in 2011 and 2012, according to federal prosecutors.

Those who donate the community service hours will receive a certificate confirming completion of the work on their behalf, Shamrakova said.

As of Thursday morning, Shamrakova had raised a total of $315 of the $821,000 she is required to repay, according to the campaign’s web page.