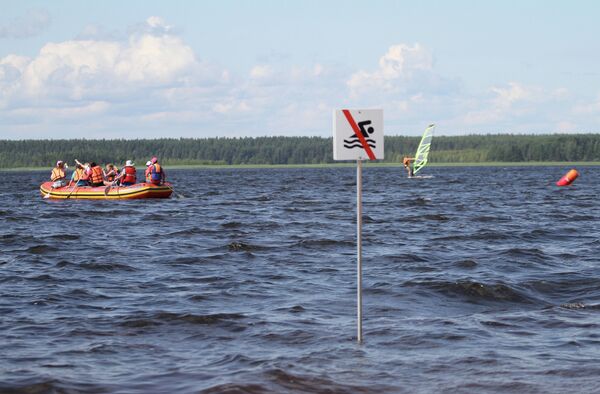 © RIA Novosti . Konstantin Rodikov
/
Go to the photo bank
Subscribe
In an incident that may not bode well for Russia’s modernization bid, an innovative “eco-balloon” launched at a Kremlin-endorsed youth forum went rogue and had to be destroyed by the military, Russian tabloid media reported Thursday.

MOSCOW, August 1 (RIA Novosti) – In an incident that may not bode well for Russia’s modernization bid, an innovative “eco-balloon” launched at a Kremlin-endorsed youth forum went rogue and had to be destroyed by the military, Russian tabloid media reported Thursday.

The experimental aerostat was supposed to collect energy and fresh water from the clouds in an eco-friendly way, the Russian tabloid newspaper Komsomolskaya Pravda daily said, citing the balloon’s developers.

It was unveiled at the youth forum at Lake Seliger, an annual gathering in Tver Region, some 380 kilometers northwest from Moscow that is sponsored and endorsed by the Kremlin.

However, the balloon became un-tethered and was carried away on an air current, another tabloid, Moskovsky Komsomolets, reported.

Ten minutes later, it was “incinerated” by a shot from a nearby military airfield, leaving the camp bewildered, the report continued.

“There was this light in the sky, and then nothing,” the paper cited a forum official as saying.

“The camp went silent for some five minutes, and then everybody dashed to the lake, but there was nothing left, it was as if the device had disintegrated,” another Seliger forum official told the paper.

Some media reports suggested the wayward balloon might have been taken out by a military-grade surface-to-air missile, but a spokesman for Russia’s Air Defense Forces told Moskovsky Komsomolets that the army has less flashy ways of disposing of unwanted flying objects.

The developers were not put off by the incident and said that they would simply make another one, Komsomolskaya Pravda reported.

On Friday, Russian President Vladimir Putin is due to attend Seliger, which runs July 14-August 5. When it started, in 2005, the forum had a strong political slant with a clear focus on taking on the opposition, but in recent years has shifted toward non-political activity.

Putin has visited the Seliger forum before, last year arriving in a helicopter. That year, Russia’s top election official Vladimir Churov, meanwhile, arrived at the camp in a balloon though there was no indication that his flight disturbed the country’s Air Defense Forces.