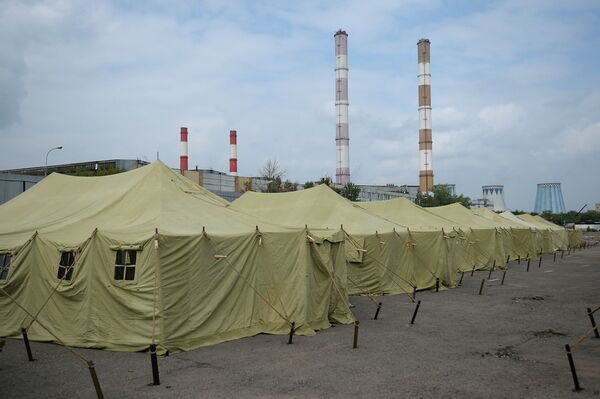 Moscow authorities said Thursday that hundreds of migrants detained in Moscow this week and facing deportation would be placed in a tent camp because the city was running out of places to keep them.

MOSCOW, August 1 (RIA Novosti) – Moscow authorities said Thursday that hundreds of migrants detained in Moscow this week and facing deportation would be placed in a tent camp because the city was running out of places to keep them.

Big green tents have been set up in eastern Moscow’s Golyanovo district to house part of the 1,400 people detained by police during marketplace raids that targeted migrants throughout the city this week.

Some 1,200 migrant laborers, mostly from Vietnam, reportedly lived and worked in illegal conditions within buildings raided by police. All the migrants, reportedly also including eight suspected bosses from Iraq, Syria, Vietnam and Azerbaijan, have been detained on suspicion of immigration offenses.

Separately, 200 more nationals of Egypt, Morocco, Syria, Kyrgyzstan, Azerbaijan and Uzbekistan have reportedly been kept on the territory of a fitness complex in eastern Moscow’s Izamailovo district.

The Golyanovo district tent camp is on an industrial site within the vicinity of where detainees were being held, according to police reports Thursday. As of late Thursday afternoon, Russian courts had not yet issued rulings on the deportations, and the tents were still empty, including without beds.

Officials told Russian media that the Golyanovo camp could house some 900 people, with about 40 in each tent.

“The camp will house those migrants who are to be identified before their subsequent deportation,” Moscow police senior official Vyacheslav Kozlov told reporters on Thursday.

He said that more migrants from other raids this week might be moved there from special detention centers if there is a court decision sanctioning their deportation. He added that they were planning to organize hot meals for the migrants.