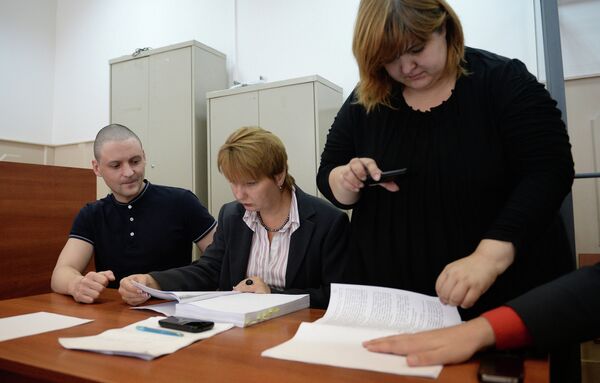 The court thus rejected a request from Udaltsov’s defense team to release him from custody pending trial on a pledge not to leave the city.

Udaltsov was placed under house arrest on February 9 for allegedly plotting to incite mass riots in Russia on the eve of Vladimir Putin’s inauguration to his third presidential term, when police clashed with protesters as tens of thousands rallied on central Moscow’s Bolotnaya Square on May 6, 2012.

Authorities have said that more than 400 protesters were detained after allegedly injuring dozens of police officers. A probe was opened against nearly 30 people, including opposition leaders Sergei Udaltsov and Leonid Razvozzhayev, after the state television channel NTV aired footage last October claiming to show Russian opposition members meeting with an influential Georgian politician, Givi Targamadze, to plot the destabilization of Russia.

The judge agreed with investigators, who claimed that Udaltsov could “flee, exert pressure on witnesses or destroy evidence,” his lawyer Nikolai Polozov told Novaya Gazeta, stressing that the investigators’ claims were totally groundless.

Meanwhile, investigators conducted searches at the homes of Left Front activists in the cities of Kazan and Ulyanovsk, the Investigative Committee said in a statement on its website. The activists were also questioned as witnesses in the so-called Bolotnaya Square case.

Investigators also seized email correspondence with Udaltsov, “the content of which indicates his proactive efforts to get the maximum possible number of participants in the March of Millions on May 6, 2012,” the committee said.