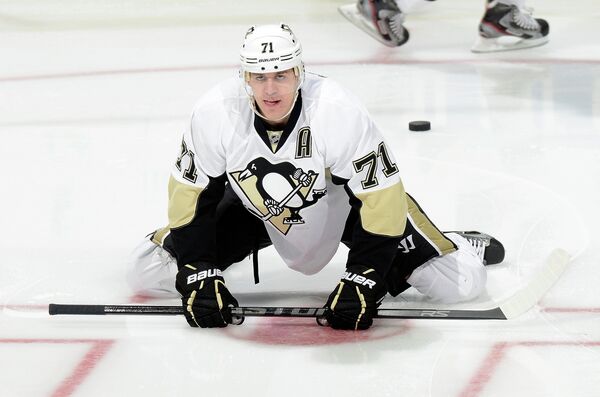 © Photo : Greg Fiume/Getty Images
Subscribe
Pittsburgh Penguins forward Evgeni Malkin told R-Sport on Thursday that he was doubtful there would be a mass exodus of the NHL’s Russian stars following Ilya Kovalchuk’s recent departure and called the former New Jersey Devils star’s defection to the KHL an “exception to the rule.”

MOSCOW, August 1 (R-Sport) – Pittsburgh Penguins forward Evgeni Malkin told R-Sport on Thursday that he was doubtful there would be a mass exodus of the NHL’s Russian stars following Ilya Kovalchuk’s recent departure and called the former New Jersey Devils star’s defection to the KHL an “exception to the rule.”

“Ilya’s chosen this path, and I’ve got no right to judge him,” Malkin said. “They’re saying that this will become a trend, but it’s really an exception to the rule.”

Last month, Kovalchuk signed a four-year deal with SKA St. Petersburg, days after abruptly walking away from a 15-year, $100 million contract with the Devils that was set to pay him $77 million over the next 12 years. He is the highest-profile Russian to leave the NHL for the KHL since the latter started in 2008 and signaled a major coup for the 28-team, eight-country league.

Malkin, who turned 27 on Wednesday, is considered one of Russia’s top hockey exports and, as one of the country’s most marketable players, is often fingered as someone who might one day bolt North America’s top league for the KHL.

In June, the four-time NHL All-Star signed an eight-year, $76 million contract extension that will keep him in Pittsburgh through the 2021-22 season. And on Thursday, Malkin, who won the Hart Trophy in 2012, called the NHL “my priority.”

“A lot can happen, but as long as I feel comfortable in America I might as well leave well enough alone,” he said. “I’ve won a Stanley Cup with the Penguins, I’ve got individual awards, I get a lot of playing time, I have an excellent relationship with my teammates and coaches."

“Why would I look for something else? I have everything.”