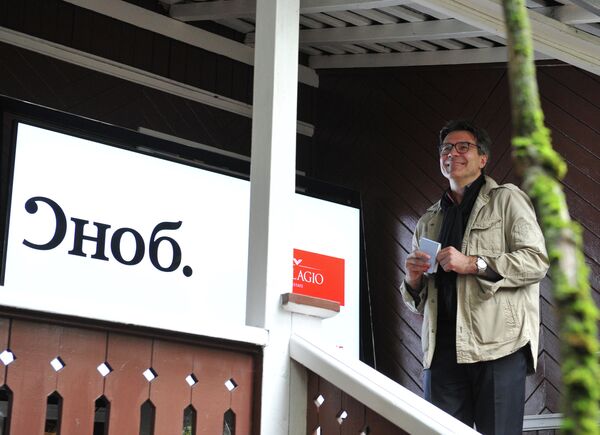 © RIA Novosti . Sergei Kuznetsov
/
Go to the photo bank
Subscribe
A magazine for Russia’s wealthy has topped a list of media most prone to using bad language, according to a new study that comes in the wake of a new campaign by conservative lawmakers against online obscenities.

MOSCOW, July 31 (RIA Novosti) – A magazine for Russia’s wealthy has topped a list of media most prone to using bad language, according to a new study that comes in the wake of a new campaign by conservative lawmakers against online obscenities.

Russian media used 1,133 obscene words over the past two years, according to data posted by media monitoring company Medialogy on its Facebook page Wednesday.

The online domain of the monthly Snob magazine, aimed at Russia’s moneyed set, was the runaway leader with 354 instances of obscenity used between mid-2011 and this July.

The runner-up was Sports.ru with 202 bad words, but other top cursers included Russian Pioneer website, whose columnists have included Wikileaks founder Julian Assange and former Kremlin ideologist Vladislav Surkov; online lifestyle magazine Lookatme.ru and culture website Openspace.ru, both popular with the hipster crowd; and the Russian edition of Esquire magazine.

Use of “strong language” in media has been an administrative offense punishable with fines of up to 200,000 rubles ($6,000) since a new law was passed in Russia in April.

The bill was criticized for not giving a legal definition of “strong language,” a task that has repeatedly puzzled conservative Russian lawmakers in the past. The Russian language has four words generally recognized as comparable in strength to the “F-word” in English, but also numerous derivatives and other obscenities that do not have the same impact.

Conservative lawmaker Yelena Mizulina said Monday she is ready to draft a law to ban bad words on the Russian internet and file it with the federal parliament in the fall, Lenta.ru reported. Mizulina, who was behind recent legislation on non-political internet censorship and a ban on “gay propaganda,” also sought recently along with her colleague Olga Batalina to have criminal case opened against gay rights champion Nikolai Alexeyev, who has repeatedly slammed her on Twitter using terms that have been, since the April law, unfit for media citation.