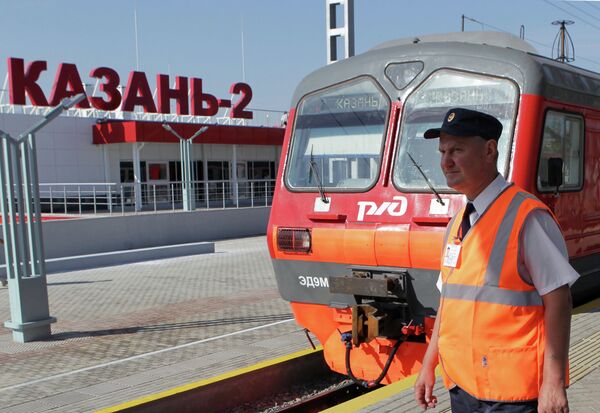 Russian President Vladimir Putin on Wednesday called for the $28 billion high-speed Moscow-Kazan railway to be extended to the Siberian city of Krasnoyarsk.

NOVO-OGARYOVO, July 31 (RIA Novosti) – Russian President Vladimir Putin on Wednesday called for the $28 billion high-speed Moscow-Kazan railway to be extended to the Siberian city of Krasnoyarsk.

The 800-kilometer line that is currently under construction is expected to cut travel time from Russia’s capital to the biggest city in the Volga republic of Tatarstan from 11 1/2 to just 3 1/2 hours.

But that line, Putin said, is an initial step that could become “a pilot section of a future route that will link the Volga and Ural regions.”

According to state railroad monopoly Russian Railways, the Moscow-Kazan line is expected to carry 7.4 million passengers annually by 2019.

Putin also proposed that the regions along which the new line will pass should have a direct stake in the project, which would also help enhance the responsibility of regional authorities for their part of the effort.

“Of the 649 billion rubles in state support for the construction project, the Finance Ministry has confirmed the provision of 231 billion rubles: 150 billion from the National Welfare Fund and 81 billion in budget grants,” he said at a meeting on the railroad project.

Another project financing option is the investment of pension funds into 139 billion rubles worth of bonds with maturities of up to 30 years at a rate of inflation plus one percentage point, he said.