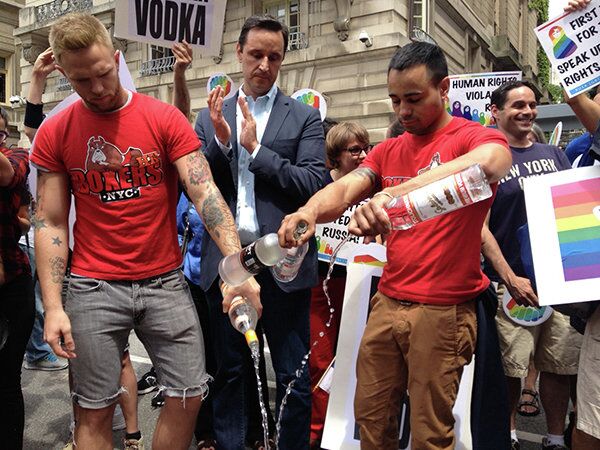 © RIA Novosti . Dan Elias
Subscribe
Vodka was flowing outside the Russian Consulate in New York City Wednesday – not into glasses, but onto the street. Dozens of gay rights activists cheered as bottles were dumped directly opposite the consulate building – in the latest protest against Russia’s new laws on homosexuality, which critics say are part of a broader crackdown on Russia’s gay community.

NEW YORK, July 31 (By Dan Elias for RIA Novosti) - Vodka was flowing outside the Russian Consulate in New York City Wednesday – not into glasses, but onto the street. Dozens of gay rights activists cheered as bottles were dumped directly opposite the consulate building – in the latest protest against Russia’s new laws on homosexuality, which critics say are part of a broader crackdown on Russia’s gay community.

The protest was organized by RUSA LGBT, an American gay rights group for Russian speakers, and Queer Nation, a New York-based organization that fights homophobia and anti-gay violence.

“We’ve received an appeal from 23 lesbian and gay activists in Russia that have asked us to do exactly what we’re doing,” Queer Nation co-founder Alan Klein said outside the consulate. “Boycott Russian products, boycott the Olympics and keep the pressure up.” The 2014 Olympic Winter Games are to be held in Sochi, Russia.

The protesters are also calling for the corporate sponsors of the Sochi Games, including Coca-Cola, Visa, McDonald’s, Procter & Gamble, and Samsung to pull their backing. The protesters’ anger is directed primarily at the controversial promotion of “non-traditional relationships” toward minors law signed by Russian President Vladimir Putin earlier this month, as well as a new law banning same-sex couples from adopting children in Russia.

The vodka-pour was also meant to encourage restaurants and bars to stop serving Russian-made products, a call that’s already been heeded by some New York City establishments.

Daniel Kucera, owner of the “Etcetera Etcetera” restaurant in New York, said he’s taken Russian vodkas and caviars off the menu. “I wasn’t asked to do it. It’s just basic human rights for me,” he said.

Some of the companies targeted suggest the boycott is misplaced; including what might be the single best-known Russian brand – Stolichnaya. The makers of the vodka, Luxembourg-based SPI Group says Stolichnaya is a longtime supporter of the gay community and sponsor of gay pride events.

Bob Fluet, proprietor of two gay sports bars in New York, banned the sale of “Stoli” and other Russian vodkas last week. He acknowledged Stolichnaya’s long record of support, but said that shouldn’t be confused with altruism.

“No matter what they say, these are business decisions,” he said. “We’re a good business venture for them - all the gay bars are, so that’s why they support us. What they need to do is take the money they spend here and show us how they’re supporting gay youth and the LGBT (Lesbian, Gay, Bisexual and Transgender) community in Russia. And then we can say they’re being proactive for us.”

The Russian Consulate was open during the protest, receiving visitors seeking visas and conducting other business. A request by RIA Novosti for comment on the protest was rebuffed by a consulate employee outside the main entrance.

Protests are also planned in other cities, including outside the Russian Embassy in Washington and the Russian Consulate in San Francisco.