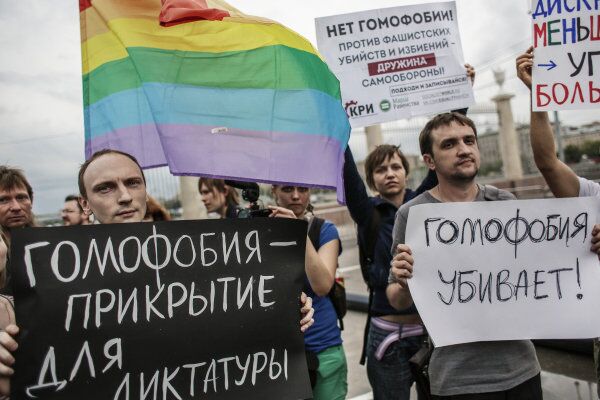 As boycotts of Russian vodka spread across the globe in protest over new Russian laws on homosexuality, US gay rights activists warn the campaign could be the first stage in a broader drive targeting Russia’s economy and image with the Sochi Winter Olympics six months away.

WASHINGTON, July 30 (By Carl Schreck for RIA Novosti) – As boycotts of Russian vodka spread across the globe in protest over new Russian laws on homosexuality, US gay rights activists warn the campaign could be the first stage in a broader drive targeting Russia’s economy and image with the Sochi Winter Olympics six months away.

“I don’t think the Russian vodka industry is going to be hurt, but it brings the attention,” journalist and author Michelangelo Signorile, a prominent US gay rights activist, told RIA Novosti on Tuesday. “… Then we’ll see the focus go to American companies and investment in Russia. That is where there can be a very effective strategy.”

Amid a stream of images and reports highlighting an official crackdown and vigilante violence against gays in Russia, US activists last week called for a boycott of Russian vodka, a campaign that has centered on Stolichnaya, an iconic Russian brand of the traditional sprit.

The movement has morphed into a global groundswell, with gay bars in several US cities being joined by establishments in Canada, Britain and Australia in yanking Russian vodka from their shelves.

At the same time, there has been a smattering of calls to boycott the Sochi games, though several notable gay activists and former Olympians – including US figure skater Johnny Weir and Olympic champion diver Greg Louganis – have publicly stated their opposition to such a move.

Instead, the lesbian, gay, bisexual and transgender (LGBT) community could take the momentum from the vodka boycotts and pressure corporations sponsoring the Sochi Olympics, including Coca-Cola, McDonald’s, Procter & Gamble and Visa, said Nina Long, co-president of RUSA LGBT, a gay rights group made up of Russian-Americans in New York.

“They, of course, are next in line to feel the pressure to withdraw their sponsorship from the games,” Long told RIA Novosti on Tuesday “Then of course there are companies that heavily invest in Russia, and they would be a third target.”

Pressure from LGBT groups is likely to be more effective when applied to economic interests rather than trying to directly impact Russia’s political system, Long said. A controversial law signed by Russian President Vladimir Putin banning the promotion of “non-traditional relationships” toward minors is worded too vaguely to hold it up as a clear demonstration of human rights violations, she said.

Critics say the law is part of a broader crackdown on Russia’s gay community, while proponents say it shields children from harmful influences.

Since US author and gay rights activist Dan Savage called for a boycott of Stolichnaya and other Russian products in a blog post last week, there has been debate in the LGBT community and its supporters about the wisdom and effectiveness of the campaign. Nikolai Alexeyev, a leading Russian gay activist, has said the boycott makes little sense since Stolichnaya – commonly known as “Stoli” – is bottled in Latvia and has its corporate headquarters in Luxembourg.

But another well-known US activist, John Aravosis, wrote this week that “the point of a boycott isn’t only the boycott itself.”

“My goal in this campaign is to make clear to countries that homophobia is not okay, and that they will pay a severe price for oppressing their [LGBT] citizens,” Aravosis wrote. “And that goal can be accomplished whether or not Stoli or any other Russian brand loses a lot of, or ‘enough,’ (or any) money.”

Individual Russian companies are merely tactical targets in a larger battle to tarnish Russia’s image and pressure lawmakers in Moscow “to make permanent change on this issue – if for no other reason than to simply make us all just go away,” Aravosis wrote.

In a blog post Monday, Signorile proposed that the next step in the campaign should be to pressure US companies with corporate policies promoting equality for the gay community and that have significant interests in Russia. These include Procter & Gamble, the heavy machinery company Caterpillar, accounting firm Ernst & Young, and hotel chains such as Holiday Inn, Hyatt, Marriott, and Sheraton, Signorile said.

The vodka boycotts have gained traction in part due to a series of graphic images and videos that have circulated widely on the Internet over the past two weeks showing LGBT activists being attacked and abused by vigilante groups and being detained by police during protests, Signorile said.

These images – along with prominent voices such as Savage publically taking up the cause of gay rights in Russia and the global spotlight the Kremlin finds itself in as Sochi approaches – have created “a perfect storm” to galvanize activists for the vodka boycotts, he added.

Dozens of activists are planning to protest Russia’s gay rights record Wednesday outside the Russian embassy in Washington and the Russian consulate in New York City, where demonstrators plan to dump Russian vodka into the gutter.

Aravosis wrote Monday that the vodka boycott “has begun as well as any boycott could, and really far better than even I expected.”

“I’m looking forward to many more,” he wrote.