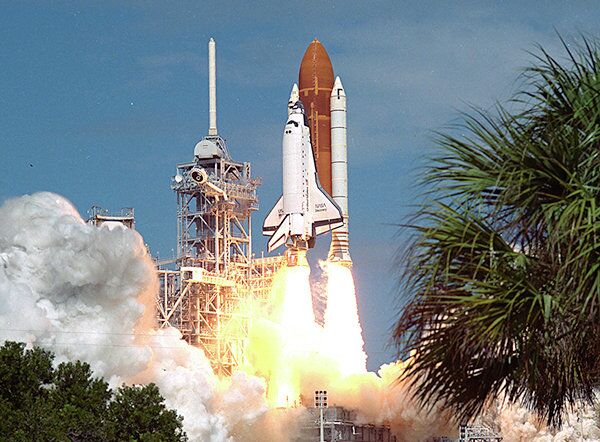 Spurred to action by the Soviet Union’s successful space program that sent the world’s first satellite into orbit, US President Dwight Eisenhower knew that America needed a more organized and focused effort that could compete with the country’s Cold War adversary. That realization led to the creation 55 years ago of the National Aeronautics and Space Administration (NASA).

WASHINGTON, July 29 (Suleiman Wali for RIA Novosti) — Spurred to action by the Soviet Union’s successful space program that sent the world’s first satellite into orbit, US President Dwight Eisenhower knew that America needed a more organized and focused effort that could compete with the country’s Cold War adversary. That realization led to the creation 55 years ago of the National Aeronautics and Space Administration (NASA).

With the Cold War over, and with space cooperation replacing the space race, NASA has had many milestones since its creation in 1958—the early ventures of which were initiated merely to keep up with the Soviets.

1. After Russia launched the world’s first satellite, Sputnik (Russian for “traveling companion”), NASA immediately began work on its own design. Following three months of development, Explorer 1 was launched and began circling the earth 12 times per day for a dozen years. Here, the scientists who created the satellite hold up a full-scale model of Explorer 1 in Washington in 1958, after confirmation that it was successfully in orbit.

2. The X-15 rocket aircraft—a joint program by NASA, the US Air Force and Navy, and North American Aviation—made 199 flights to the edge of space between 1959 and 1968, breaking speed and altitude records at the time. Among its pilots was a young Neil Armstrong, pictured here.

3. Ham the chimp became the first hominid in space. In January 1961, the monkey survived the historic mission and returned safely to Earth. Here, Ham is retrieved from the Atlantic Ocean after his vessel splashed down from space.

4. Less than a month after Soviet cosmonaut Yuri Gagarin became the first human to travel to outer space and orbit the Earth in April 1961, US astronaut Alan Shepard boarded an American rocket for a 15-minute flight into the cosmos.

5. In an address to the US Congress on May 25, 1961, President John F. Kennedy announces full presidential support for the United States to “commit itself to achieving the goal before this decade is out, to landing a man on the Moon and returning him safely to the Earth.”

6. In February 1962, astronaut John Glenn lifted off into space and became the first American to orbit the Earth. After circling the globe three times, Glenn’s capsule landed in the Atlantic Ocean, where it was recovered 21 minutes after splashdown. Glenn returned to the US as a national hero.

7. In 1964, NASA’s Mariner 4 spacecraft was the first to capture close-up digital images of Mars. The photos, which showed a dead, cratered surface, were a disappointment to those hoping to see signs of life.

8. Fulfilling President Kennedy’s commitment to a lunar landing before the decade was out, NASA’s Apollo space program sent astronauts Neil Armstrong and Buzz Aldrin to the moon on July 20, 1969. The event was broadcast on live TV to a worldwide audience as Armstrong described the feat as “one small step for man, one giant leap for mankind.” Here, Aldrin is photographed by Armstrong on the lunar surface.

9. In July 1975, the first joint US-Soviet space flight was launched. Known as the Apollo-Soyuz Test Project (ASTP), the mission was meant to be a symbol of the détente policy that the two superpowers were pursuing at the time, as well as a mark that would end the space race between the two nations. Russian cosmonaut Alexei Leonov, left, and American astronaut Deke Slayton were part of that mission.

10. In July 1976, NASA’s Viking 1 spacecraft captured the first images on Mars. The images revealed a rock-laden reddish surface and sky.

11. In 1983, aboard the space shuttle Challenger, astronaut Sally Ride became the first American woman in space, breaking a long tradition of all-male missions. She was preceded by two Soviet women: Valentina Tereshkova in 1963, and Svetlana Savitskaya in 1982.

12. Marking NASA’s greatest tragedy, the space shuttle Challenger exploded 73 seconds after liftoff in January 1986, killing all seven crew members on board. Among them was American teacher Christa McAuliffe, who was to be the first educator to be taken to space. The disaster, which was captured on live television, deeply shook the American public and the NASA space program.

13. The Hubble Space Telescope was taken into orbit by a NASA space shuttle in 1990. It remains in orbit and has captured the highest resolution images ever from space.

14. Launched in 1996 and landing on the Red Planet in 1997, the Mars Pathfinder traveled 309 million miles and returned thousands of photos back to Earth for one year. This unmanned mission cleared the way for further Mars research projects.

15. NASA’s Curiosity rover followed the Pathfinder’s successes by reaching Mars in August 2012. Aside from capturing many high-resolution images, the Curiosity has been sent to investigate Martian climate and geology, and to assess whether there was ever life on the Red Planet. The rover remains on Mars to this day.