Women Should Get Time Off During Menstruation – Lawmaker 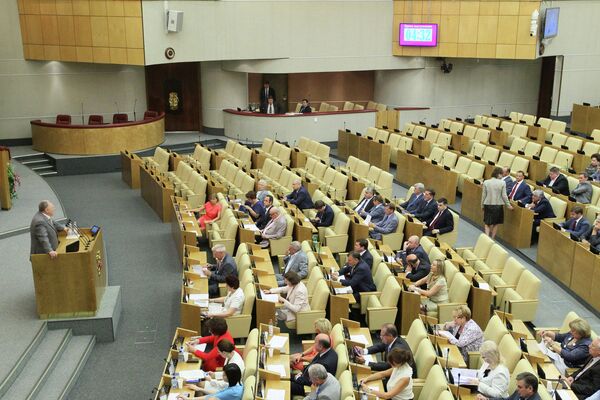 A nationalist deputy from Russia’s State Duma put forward legislation Monday entitling working women to two days holiday every month during the “critical days” when they are menstruating.

“In this period, the majority of women experience psychological and physical discomfort,” LDPR member and Moscow mayoral candidate Mikhail Degtyarev, 32, said in a statement. “Often the pain for the fair sex is so intense that they are forced to call an ambulance.”

The disruption to working women caused by menstruation is so acute that it represents a problem for society, according to the draft bill submitted by Degtyarev to the Duma.

“Strong pain induces heightened fatigue, reduces memory and work-competence and leads to colorful expressions of emotional discomfort,” reads a copy of the bill published on Degtyarev's wbesite. “Therefore scientists and gynecologists look on difficult menstruation not only as a medical, but also a social problem.”

Obliging employers to provide a holiday for female employees will ensure “fair working conditions” for women and increase their “psychological health,” according to Degtyarev.

It was not immediately clear, however whether the menstruation bill would have enough support to be passed by the Duma. Andrei Isaev, a member of the incumbent United Russia party and the head of the Duma's Labor, Social Politics and Veteran Affairs Committee, said Monday that the legislation was "ill conceived."

The nationalist LDPR party is known for its traditional, and sometimes outspoken approach to many gender, lifestyle and moral issues. Last month, party leader Vladimir Zhirinovsky said that the new head of Russia’s Central Bank – Elvira Nabiullina – would struggle because the post demanded “male brains.”

Degtyarev is the LDPR’s candidate in Moscow mayoral elections scheduled for September 8. Less than 1 percent of Muscovites are planning to vote for him, according to a July 17 poll by the Levada Center.