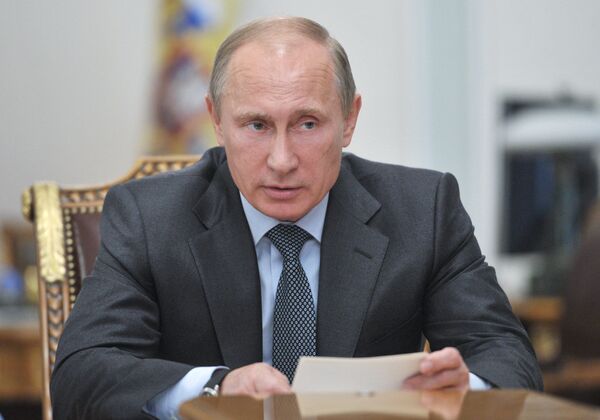 © RIA Novosti . Alexei Nikolski
/
Go to the photo bank
Subscribe
Delivery of some new ships to the Russian Navy due after 2015 under the current procurement program, could be delayed until 2025, President Vladimir Putin said Monday.

NOVO-OGARYOVO, July 29 (RIA Novosti) - Delivery of some new ships to the Russian Navy due after 2015 under the current procurement program, could be delayed until 2025, President Vladimir Putin said Monday.

"I know you have voiced the idea of introducing amendments into the existing state armaments program for financing ships which are due to be handed over by 2015," he told a conference on the Navy’s development. "And for ships due after 2015 - ascertain the amount of money already in the new state program for the period to 2025. This is all possible, let's see, but only so there are not setbacks," in order to “synchronize manufacturing capabilities with the volume of funding provided,” he added.

Putin said last year that the procurement of new warships and submarines for the Navy would be a priority over the next decade. The Russian government has allocated five trillion rubles ($166 billion) or a quarter of the entire armament procurement budget until 2020 for the fleet. Defense Minister Sergei Shoigu said in March the Navy would receive 24 submarines and 54 surface warships by 2020.

About 750 warships were modernized or repaired last year, Putin said Monday, adding that development and testing of some new surface ships and submarines has been marking time.

He attributed the delays in the delivery of new warships and weapon systems for the Navy to irregular supplies of components to subcontractors, a lack of effective collaboration between design organizations and manufacturing enterprises, and the low quality of equipment.

No less than 132 equipment failures were found during construction of one warship, he said, urging industry and defense related agencies to submit proposals on ways of improving the situation.

Putin has already criticized the naval shipbuilding industry this year for its poor performance. In May, he sacked the head of United Shipbuilding Corporation, Andrei Dyachkov, after just 10 months in the job, and warned the new management he expected a major shakeup in the sector.