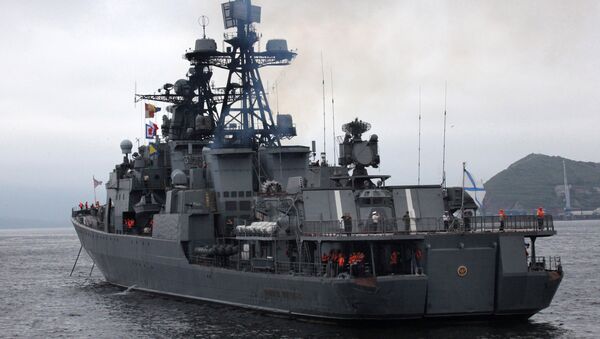 Russia’s task force created in the Mediterranean Sea should be an effective tool of the country’s foreign policy, an ex-navy chief said on Sunday.

MOSCOW, July 28 (RIA Novosti) – Russia’s task force created in the Mediterranean Sea should be an effective tool of the country’s foreign policy, an ex-navy chief said on Sunday.

Russia began setting up a naval task force in the Mediterranean in March, sending several warships from the Pacific Fleet to the region for the first time in decades, including the destroyer Admiral Panteleyev, the Peresvet and the Admiral Nevelsky amphibious warfare ships, the Pechenga tanker and the salvage/rescue tug Fotiy Krylov.

Warships from Russia’s Northern, Baltic and Black Sea Fleets are also currently staying in the Mediterranean on a rotating basis. Navy Commander Admiral Viktor Chirkov said in May the Mediterranean task force may be enlarged to include nuclear submarines.

“The fleet has always been a tool of foreign policy. Any country with the seacoast, which is especially large in Russia, must think about how to defend its coasts and prevent alien actions,” said Feliks Gromov, Russia’s navy chief in 1992-1997.

“That is why, the operational task forces, which the Soviet Union employed – one in the Mediterranean and the other in the Indian Ocean – were created for the purpose of exercising political leverage, supporting some states and warning others. Soviet warships were always present in the Mediterranean in the state of combat readiness,” Gromov said in an interview with RIA Novosti.

Russia must have warships that would be able at any time to solve state tasks in the area that has considerable influence on the situation in the entire southern region, he said.

“This includes not only the Mediterranean, but also the Pacific region, and also the struggle against pirates in the Horn of Africa,” he said.

“The Pacific Fleet should have at least two aircraft carriers and the corresponding number of combat and support ships. In the [Russian] North, at least one aircraft carrier is needed, considering that the Admiral Kuznetsov aircraft carrier has served for many years and needs good repairs,” he said.

Such warships must be built in Russia, the admiral said, adding the country could start their construction in this decade. “The efforts of the defense and industrial complex must be concentrated on this and there must be understanding of the basic tasks the country has.”