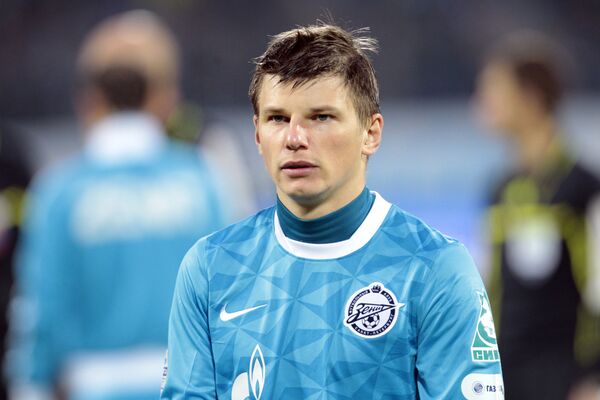 Playing in his home town of St. Petersburg for the first time since the end of a loan spell with Zenit from Arsenal in 2011-12, Arshavin tapped Alexander Kerzhakov’s low cross into an unguarded net on 65 minutes to give Zenit the lead.

Arshavin had only come off the bench 10 minutes earlier and his goal sent the home crowd into raptures despite the straightforward nature of the finish.

Zenit looked set to take all three points but were denied when a speculative shot from Kuban’s Ivelin Popov ricocheted off his teammate Gheorghe Bucur and past Zenit’s stranded second-choice goalkeeper Yuri Lodygin on 79 minutes.

“We had chances to increase the score, but when you don’t score and your opponents score in that sort of way, with a ricochet, there’s nothing more to say,” Zenit coach Luciano Spalletti said in televised comments.

The result continues Zenit's underwhelming start to the season, with one win in three league games and a 3-0 defeat in the Super Cup to CSKA Moscow.

Zenit dominated possession throughout but failed to turn it into goals as the Kuban defense held firm in the southern Russian team’s first game without playmaker Aras Ozbiliz, who departed for Spartak Moscow earlier in the day.

“It’s probably good to come out with a draw after a game like this against a team who rightly consider themselves among the leaders in Russian football,” Kuban coach Igor Osinkin said in televised comments.

“But to say that we came here just for a draw, that that was our maximum desire, you can’t say that. We wanted to win.”

Zenit had 69 percent of the ball in the first half but created very little with it, their best chance of a goal coming when Kuban defender Xandao almost headed a cross past his own goalkeeper.

At the other end, only 17-year-old debutant Dzhamaldin Khodzhaniyazov stopped Zenit from going behind when he stepped in to stop a menacing Kuban breakaway in which the visitors had a two-man advantage.

In the second half, Zenit wasted scoring chances, winger Vladimir Bystrov heading into goalkeeper Alexander Belenov’s arms off a fine Arshavin cross. On another attack, Kuban denied Kerzhakov with a goalline clearance.

Late on, Zenit center-back Luis Neto picked up an injury but struggled on to the finish. Zenit faced Kuban without four first-team regulars, including striker Hulk, who has said he has a minor leg injury and wants to rest to be at 100 percent for a Champions League qualifier against Denmark’s Nordsjaelland next week.