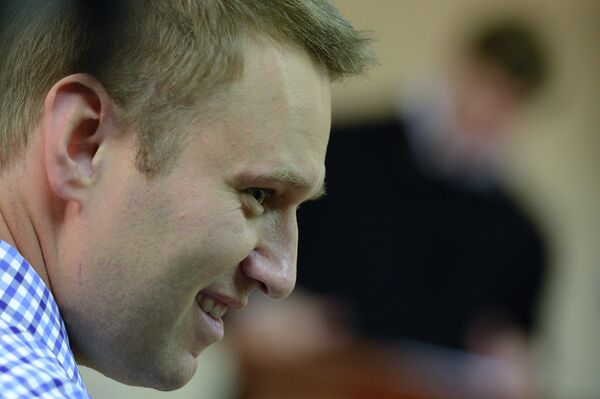 As more Russians learn of Kremlin critic Alexei Navalny, more of them believe he’s being prosecuted for wrongdoing and not as retribution for his activism, suggesting that official versions of the whistle-blowing blogger’s trial have had an effect on public opinion, according to a new poll published Friday.

MOSCOW, July 26 (RIA Novosti) – As more Russians learn of Kremlin critic Alexei Navalny, more of them believe he’s being prosecuted for wrongdoing and not as retribution for his activism, suggesting that official versions of the whistle-blowing blogger’s trial have had an effect on public opinion, according to a new poll published Friday.

The independent pollster Levada Center conducted a poll among Russians to gauge their awareness of and attitudes to Navalny, in the same week he was sentenced to five years in prison on embezzlement charges. Navalny, who is running in the poll for Moscow mayor on September 8, has claimed the charges against him were fabricated in revenge for his criticism of the Kremlin and his whistle-blowing on corruption within the state.

The poll, conducted from July 18 to 22, showed that 21 percent of people asked did not know who Navalny is, down from 30 percent in polls conducted in the two previous months.

Of those respondents who said they had heard of the case, the number believing his fight against corruption led to him being charged had fallen. In the latest poll, 46 percent said they believed the court case was connected to Navalny’s public activities as a whistle-blower. In June, that figure was 47 percent, down from 54 percent in May.

In contrast, the proportion of those who had already heard of Navalny and who said the case had been opened because he broke the law while working as an advisor to the governor of the Kirov Region grew to 32 percent, from 28 percent in June and 20 percent in May.

Of those respondents who had heard of Navalny prior to the poll, most (25 percent) had not heard that he had been sentenced to five years in prison. The next largest group – 21 percent – said the punishment was entirely appropriate, while 17 percent said it was too harsh and 5 percent too light. Thirteen percent said that the sentence was unfair as Navalny had not committed any crime.

The poll recorded a small increase from a year ago in the number of Russians who believe that court cases brought against leaders of the protest movement – such as Navalny, Left Front leader Sergei Udaltsov and others – have genuine grounds: 30 percent said this was the case, as opposed to 29 percent in July 2012. A slightly higher number – 31 percent – said that such court cases are opened on trumped-up or false grounds to scare the leaders of the protest movement and force them to stop their political activities. That figure was down from 33 percent a year ago.

The poll was conducted among 1,601 adults in 45 regions of the country. The margin of error did not exceed 3.4 percent, according to the Levada Center.