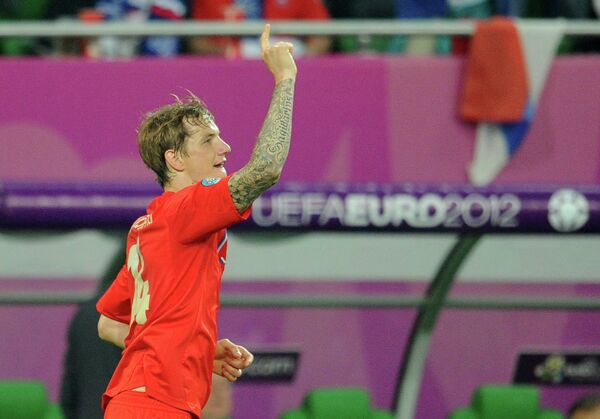 The Lokomotiv Moscow marksman was a victim of coach Fabio Capello's overhaul of the Russia squad after the country's poor showing in Euro 2012; his last appearance coming in August's 1-1 friendly draw against the Ivory Coast, the Italian's first game in charge.

"I think my romance with the national team is already over, and other people will help Fabio," the 31-year-old told Sport-Express. "It's clear I'm unlikely to be picked, but I have already turned the page," he said.

"I've thought about this a lot, I've discussed it with my friends and family and I've realized that you need to go out when the time is right."

Asked if he had ambitions to play at the 2014 World Cup in Brazil, Pavlyuchenko said "we need to appraise the situation objectively."

Pavlyuchenko burst onto the global scene with two goals against England in a 2-1 victory in a Euro 2008 qualifier at Luzhniki Stadium.

He helped Russia finish an unprecedented third at the competition itself and was named in the 23-man team of the tournament, earning him a 13.7 million pound ($20.8 million) move to Spurs.

Pavlyuchenko is currently attempting to revive his club career after sitting out much of 2012-13 on the substitutes' bench at Lokomotiv. He scored his first goal in months over the weekend with the second equalizer in a 2-2 draw against Anzhi Makhachkala.